Video and audio calls on WhatsApp are currently available for one-on-one conversations only. But the new feature will allow WhatsApp groups to engage in a video call. In its blog, the Facebook-owned company said:

Voice and video calls are very popular on WhatsApp, and we’re excited to share that group calling will be coming in the months ahead.

According to the company’s demonstration, four people can take part in a video call at once. Details are still very unclear and there’s no word on audio calls for groups as yet.

And also stickers are coming

Soon there will be a new way to interact on WhatsApp as it prepares to introduce stickers to its platform, so users can jazz up their conversations using more than just words and emojis. 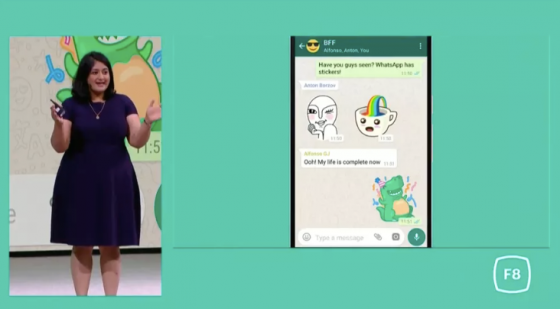 WhatsApp may be kind of slow to join the party, since other messaging apps like Facebook messenger, Telegram and WeChat introduced stickers some time ago, but better late than never.

Users will also reportedly be able to download additional sticker packs from an app store. That means that third-party developers will soon be able to offer playful ways to communicate within the popular messaging app, something that Facebook’s own messaging app, Messenger, has offered for some time.

Unfortunately, there is no news as to when this feature will be available to all WhatsApp users.