Zimbabwe Broadcasting Corporation (ZBC) is looking for an ICT company (media company) to run its live streaming service and Video-On-Demand services (VOD). Prospective partners are required to express their interest in partnering ZBC by 13 June 2018.  The move could be seen as an attempt by the state-owned broadcaster, ZBC to enlarge its audience by introducing new media channels than just its one television channel and 5 radio channels. ZBC ran the following advertisement; 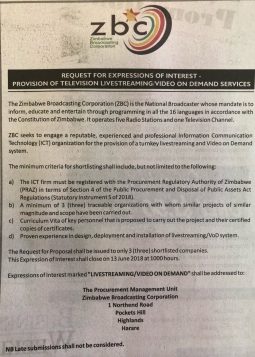 ZBC seem to have conceded defeat in trying to provide live streaming services as the WEB TV they tried to introduce 3 years ago was never a success.

The question on everyone’s lips is why do they have to outsource than simply employ tech-savvy people? Like I said last time, these state-owned enterprises lack the necessary human resources and above all, they lack financial resources to introduce services like these, Not to mention the lack of quality content as well.

With ZBC being synonymous with poor programming and biased news, will their VOD service gain viewers in the event that they found a partner? The chances are low unless they change their stance.  Given the alleged bureaucracy of ZBC, it’s inconceivable that a major media company (particularly private companies) would want to partner with them.