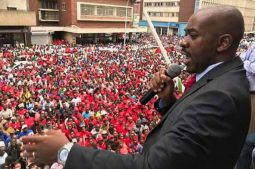 Usually you expect politicians to be the last to know what’s going on especially anything tech related. Politicians seem to come from some other planet where long windy speeches are loved and appreciated or even understood. It’s refreshing to see tech entering the political discourse this election.

Most times technology is discussed at political forums in association with ‘we want to do something for our youth.’ I hate that condescending and uninformed cliche tone. The MDC Alliance manifesto reference to technology is anything but condescending and it is not the regular youthie coated piece of text that someone placed as an after thought meant to attract the young.

Their proposition is not vague too. Here’s a block quote:

Expansion of the range of e-applications that are available, particularly in government, health, education, accounting, engineering and financial services.

The MDC Alliance will ensure that the following services are available:

Block chain technology is the epicentre of the fourth industrial revolution. The block chain revolution technology. is a complex. growing list of records and platforms (Blocs) which are technically linked and secure though cryptography.

The MDC Alliance government will promote the integration and use of Block Technology in the following areas:

i. Finance and Banking.

6.8.2 Roll Out Phase of the fourth revolution

The MDC Alliance government will roll-out the integration of blockchain technology in industrialization through the following:

i. Setting up task force teams. for each of the priority areas identified above. made up of subject matter experts to fast track policy guidelines and to advise on the formation of permanent structures to deal with the continuous evolution in this space.

Blockchain was a surprise inclusion. Politicians being politicians they must have followed the ensuing uproar after the Reserve Bank of Zimbabwe attempted to outlaw cryptocurrenciies and they may want to capitalise. Then again there was equal noise from those who thought it was a good move so maybe the MDC Alliance has a position on this beyond politicking.

It’s interesting that they seem to have captured the scope of what blockchain technology is about. You can check out some of these applications of the technology as they relate to Zimbabwe and how local companies are using blockchain in the Techzim Insights’ State of Blockchain Technology in Zimbabwe Report. To buy the report just Ecocash the fee of $4.99 to the Techzim Merchant Account 83688 then email the confirmation of payment to admin@techzim.co.zw and we will email it to you. You can email if you want to use other modes of payment and we will assist.

I guess politicians will be politicians. I am not a fan of buzz words. One such is, ‘4th Industrial Revolution.’ These terms tend to be meaningless sometimes. I prefer people say the specifics of what they are talking about and not refer to ambiguous new age cliches. Anyway that’s just me.

The MDC Alliance president may have got into an embarrassing situation with the president of Rwanda after he alleged that Rwanda’s developments in the ICT space was partly due to him (Chamisa) but his party (or his alliance of parties- Zim...) seems to be seriously looking at how emerging technologies can be applied in Zimbabwe right now.

Rwanda’s national currency has been put on the blockchain by the way so maybe, just maybe…

17 thoughts on “MDC Alliance Manifesto Maps Out Their Vision For Tech, Blockchain Has Central Role”