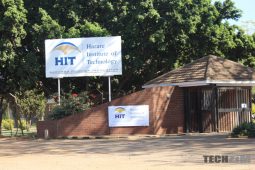 Earlier on we noted that we were at the on-going preliminary National Engineering Students Awards Competition being hosted at Harare Institute of Technology and there were some interesting projects at the competition.

8 contestants competed in the oral section and we’ll take you through the solutions that were in the top 3.

If you use the Zimbabwean road transport potholes are probably just a normal facet of life. If you think about it, there are many children in our country who have never experienced or seen properly maintained roads. Just last week I almost rolled my ankle when I walked into a pothole on my way home! NO ONE IS SAFE! Even the pedestrians are tired of potholes.

This is why even though Mayibongwe’s project was very technical, not once did the audience become restless as they were eager to see how one of their biggest problems can be solved.

According to Miss Sibanda:

This study focuses on solving two major issues which are management of municipal water treatment sludge which is currently being dumped at treatment plants and secondly the formation of potholes that have become the characteristic feature of Zimbabwean roads  due to excessive traffic.

Her experiments proved it was possible to make road construction cement from sludge. The ingenuity of this solution was that it was a solution to a problem that resonates with a large crowd.

The only questions posed to Mayibongwe Sibanda were in relation to the strength of her materials which were not as being weaker than asphalt and also the fact that cement takes a longer time to settle than the tar currently being used. These factors did not deter her progress as judges felt this was the strongest project among them all.

The issue surrounding resources in schools is not news anymore. We are all aware of the fact that resources are lacking but what we are not doing, however, is proposing solutions. That’s not the situation for Tanyaradzwa Masaire, who designed a lap desk that can be distributed in primary schools that lack funding to get the wooden desks we have become accustomed to.

This is a great solution that will reduce stress in the schools and give students in this societies a much better educational experience than the one they’ve been getting thus far. Gone are the days of writing on the ground or on your classmates back. Now you can have a portable desk that you can use on your laps and get productive.

The desk is made of reinforced fibre which when tested proved to have stronger impact absorption and is also harder to vandalize than wood. A question was posed to Tanyaradzwa in regards to the way fibreglass is irritating to the skin and how she would counter this. She noted that there were multiple layers of coating applied to the glass with the intent to prevent the kids from being in contact with the fibreglass. This solution is targeted at schools with low-funds and even NGOs who can buy these and then donate are also part of the target market.

The desk was projected to cost $12and according to Tanyaradzwa this is much cheaper than ‘normal’ desks which cost around $25.

Talent Dewah from the Polymer Technology and Engineering scooped third place with his presentation which proposed a solution for putting laminated plastics –e.g the one used for Royco packaging- to use once they are disposed of.

His project used a process called pyrolysis with great emphasis on plastics that can’t be recycled. This process of pyrolysis allows a green fuel in the form of heavy oil (diesel) to be harnessed from plastics waste.

The project was targeting companies such as Unilever who use this kind of plastic in their packaging of products. According to Dewah, these companies are currently footing huge bills to a South African company which is contracted to collect the waste and convert it into a green fuel. The only problem is this company is in SA and the benefits are only realised there whilst if this project was carried out locally the fuel generated would be expected to power farm implements under the new command agriculture in Zimbabwe. The project would also reduce carbon footprint if implemented whilst also creating employment through industry.

5 thoughts on “Students Battle It Out At The HIT NESAC Engineering Competition: Best Projects And Their Proposed Solutions”