The ability to trade on Zimbabwe’s capital markets through digital channels is a great deal. Buying and selling of public company shares has just gone mainstream especially because this can be done using even the most basic of mobile phones without needing to access the internet. In Zimbabwe we call such phones tumbudzi in plural or kambudzi in singular (literally translated small goats/goat and no I don’t know why those phones are goats).

So, I accessed C Trade on all three channels: web, mobile app and USSD just to check out how things work so I could share here. I got a few people asking me how to trade via C Trade and I hope this article answers that clearly:

When you access ctrade.co.zw you will clearly see the button that says register, I went for it straight away. The first screen was clear enough, it looks like this:

The second screen just collects other generic info and is straight forward too. My gripe with the form on screen 2 was that ‘Telephone Number’ is a required field. This is over and above a field that says ‘Mobile Number.’ Which Zimbabwe did they build this for?

The third screen under registration gave me problems. Tucked in the corner is a field that says ‘Custodian.’ I have no idea what that is! The default entry there was ‘CABS Custodial Services.’ I used the drop down arrow to look at the options available and there were none! The drop down arrow introduced a search field… I didn’t know what on earth I was to search for. I just selected the default and moved on. Here’s how the third screen looks like and I circled the problematic field:

The above can easily be solved by trader education. My novice knowledge of capital markets tells me that the ‘Custodian’ field is no big deal but this kind of thing results in a lot of user friction. People run away from what they don’t understand. Investment into capital markets is intimidating on it’s own and so is transacting online for a significant number of people. The little C Trade could do is to do away with undefined technical terms.

The fourth screen under registration just has a ‘Submit’ button. After clicking on it you are taken to the dash board. Initially I thought I was logged in and when I went for the ‘BUY’ button a pop up to log in showed up. On closer inspection I noticed that written in small font were the words ‘Please log in first’ in two places as I show on the screenshot below:

This was a little annoying for me, I prefer to be asked to log in immediately and not for C Trade to play pretend. The same thing happens when you come back to the online portal when you already have an account. You click ‘Log in to C Trade‘ from the C Trade homepage and you are taken to the dashboard but still you will not be logged in, you have to click ‘Please log in first‘ then the log in pop up shows up. Unnecessary steps right there.

The log in pop up introduces a new term: CDS/ATP Number. I assumed this to be my Chengetadzai Deposit Service Number but I could not guess what ATP means. I am most likely wrong about what CDS means. I am just highlighting how this is an oversight to use undefined terms. I chose to log in using my email:

So the CDS/ATP number was sent to me in a welcome email from C Trade. I’m sure the email was sent right after I successfully created an account. However, even the email doesn’t define what this number is. I don’t know if the number will affect me in future if I lose it or anything for that matter. Here’s what I was sent:

First you have to deposit money into your C Trade ‘wallet.’ I clicked the ‘Deposit’ button and I was asked to choose a payment option. I chose to use EcoCash. I was then taken to the PayNow gateway. I went through the usual PayNow steps. I decided to deposit $2 to see if it works with such small amounts.

I was charged 54c for my efforts! This has to be solved somehow. Small transactions cost too much and if investment is going to be as mainstream as the Securities Exchange Commission of Zimbabwe envisions, it has to be affordable and feel like an investment not a rip off.

After loading my wallet I was ready to buy a few shares. This is what comes up after clicking Buy: 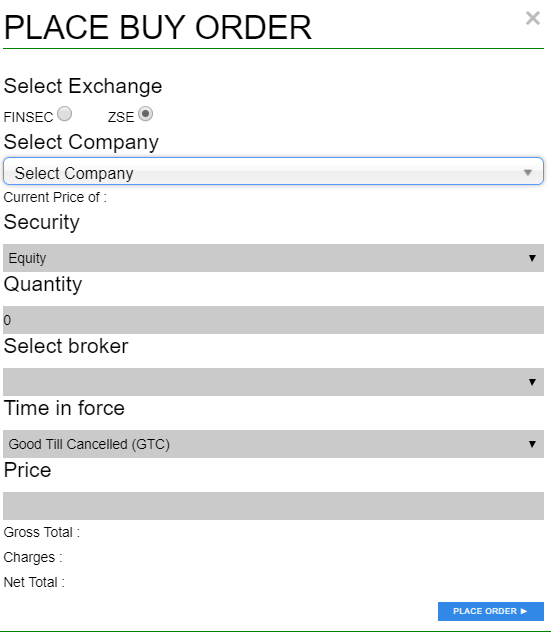 Some of the terms there should be defined for the novice investor. For example there is the drop down menu under ‘Time in force.’ The options are Good Till Cancelled (GTC), Day Order (DO), Immediate Cancel Order (ICO) and Good Till Day (GTD). These are very simple alternate instructions that could just have been simplified by placing a lil pop up definition.

As you can see you can use C Trade to trade on the Zimbabwe Stock exchange or Finsec. You have to pick a broker. This means C Trade has commoditized stock brokers. The use of brokers is still insisted on simply because the regulations of this sector are still behind technological developments. I just picked a random broker and selected to buy 10 Edgars shares which were valued at $0.60 in total. I selected GTC meaning that my order will remain valid as long as I don’t instruct the broker to cancel it.

The system accepted my order. That was on Thursday 19 July towards close of trading hours. Today is Sunday the 22nd and the order has not yet been fulfilled. I expect early this week I will have my 10 Edgars shares.

The mobile app experience of course starts off from downloading the app itself from Play Store or the App Store or wherever else. I went to the Play Store and the C Trade app has over a thousand downloads. That’s quite decent for Zim standards to have that many in just a few days and especially considering that this is a very specialised space that is probably still considered to be for the elites. I’m happy with the progress thus far.

What I didn’t like were some of the comments I saw in the Play Store. Most complaints were about the app crushing or not accessing the internet or timing out unexpectedly. At that time these were complaints about the current version. I saw some complaints about an earlier version too.

There were some good comments too. I’m not too worried about the bad ones though. The internet economy allows for iteration on the go so keep working on the app C Trade….

I successfully installed the app. There is no big difference between the app experience and the web experience. The two factor authentication on signing in still sends the OTP to email and not via text. I didn’t register a different account on mobile app, just signed into the account I created on the web. The home screen looks like this: 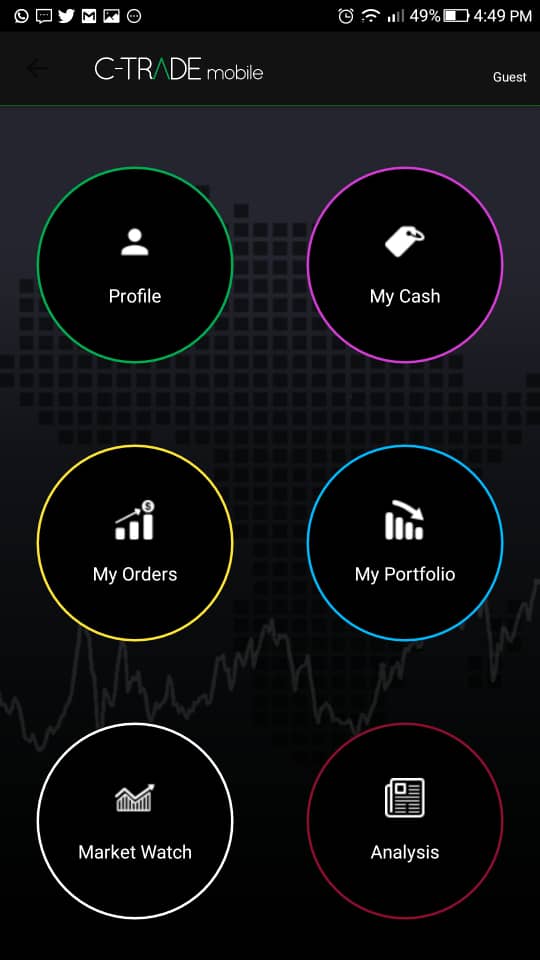 Market watch there is just the usual table of all listed counters showing the share price, volumes etc. Analysis will allow you to view the share chart for the counters one at a time.

What disappointed me is that I could not buy using the mobile app. The system notified me that the minimum transaction value was $10. I found that to be strange given that I had just successfully placed an order for $0.60 worth of shares on the web portal. Does that mean the minimum is lower on the web? That’s strange and counter intuitive. If there were different limits you would expect them to be lower on mobile.

The USSD menu is accessed by dialing *727# across all mobile networks. We managed to go through registration using USSD on all the networks but we found the process to be very tedious. There are more than 20 steps to go through on USSD. And if you make any mistake or delay at any step you have to redo from the top!

My colleague who was attempting USSD using a real kambudzi failed to go through it complaining their fingers were now numb. Remember tumbudzi do not have qwerty keyboards so entering names, addresses etc is not an easy feat.

I have shared the USSD steps using screenshots in a separate article, This one is too long as it is.

However, after registration via USSD we could not buy any shares. The system says this is not available yet.

I also failed to access the account I had created on the web app using USSD. It would ask me for a PIN (which I never set for mobile USSD). After inputing 4 digits it then says “The service *727# is not available at the moment, please try later.” I have been trying for four days. This is on Econet, I don’t know if it’s the same across the networks.

I think C Trade is a big deal. I believe investing on capital markets should be accessible to everyone. The thing I want to see for trading to really go mainstream is for the platform itself to use less intimidating and strange language. Nothing should be taken for granted. There is nothing fancy really about buying and selling shares, the language has to be less technical. Where it can’t be avoided then definitions should be within reach on the portal.

The USSD menu can be reduced to less steps. Refer to the accompanying article.

Good first step C Trade. Now to you my reader, you don’t have an excuse not to educate yourself about the markets so you can trade using your mobile even kambudzi.

25 thoughts on “How To Buy Shares On Web, Mobile App Or Even With Kambudzi Via USSD On The C Trade Platform”