The Reserve Bank of Zimbabwe has issued a press statement dismissing a ‘fake article’ talking about the reintroduction of Zimbabwe Dollar (Zim Dollar) as the country’s local currency as from July the 9th. The ‘fake article’, alleged to be signed by Finance and Economic Planning Deputy Minister Terrence Mukupe is being circulated on various social media platforms. Here is the ‘fake article’; 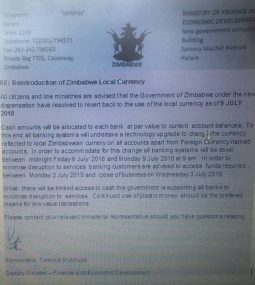 In the press statement, RBZ said the article is “false and malicious” and should be ignored as it was created by people who “seem bent on manipulating parallel market rates for personal gain at the expense of the unsuspecting members of the public”. Here is RBZ’s press statement; 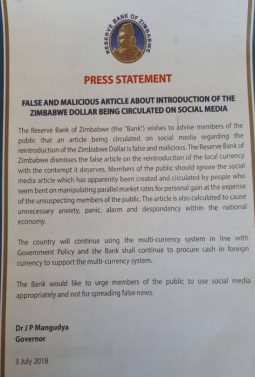 The Zim dollar was effectively abandoned on 12 April 2009 after hyperinflation in Zimbabwe reduced the Zim Dollar to one of the lowest valued currency units in the world. Zimbabwe has since started to use various currencies (multi-currency system) as legal currency within the country.

Yesterday, (before this press statement), Mr. Mukupe had dismissed the article saying that “its fake” and it was promoted by people who were determined to tarnish his name. However, he went on to state that Zim dollar will eventually return when the economy reaches a certain feat.

It’s fake. It’s just some people who want to taint my name. It’s a ‘fake article’ . The official position yes we would want the Zim dollar to return but the President said it has to be under the right conditions with the right fundamentals in place

Thanks to RBZ for this statement as it clears the air to some people who were gullible enough to believe the ‘fake article’. For many who were in the know about the increase of fake news (especially these days), they quickly dismissed the “fake article” as they hadn’t seen an official statement from RBZ asserting the reintroduction of the Zim Dollar.

2 thoughts on “RBZ Dismisses Circulating Article About Re-Introduction Of The Zimbabwe Dollar Next Week, Calls It “False And Malicious””