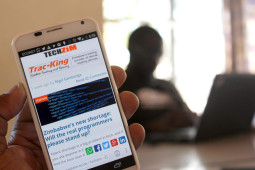 Change is not easy for human beings and for businesses. There is no security like that which comes from familiarity. As the old saying reasons, we prefer a familiar devil to an unknown angel (yes you have heard it said: better the devil you know…). But then the internet…

The internet by nature abhors familiarity. This is a technology that has changed most of what we have known or imagined and keeps changing these things. The internet does not just change life as we know it but it’s a dynamic technology/place itself which keeps changing its nature and what it offers.

That is why Techzim

Techzim exists because of the internet. First and most obviously: Techzim would not be possible without the internet. We would never have had the capital to reach the hundreds of thousands of people we reach monthly in the pre-internet world.

The look and feel of Techzim is changing, the new look will go live this weekend.

Based on your feedback

For several months we had a feedback form on the site that asked you the Techzim readers to help us improve Techzim. The new design will reflect some of that feedback. I hope we interpreted it well…

As such, the new Techzim seeks to enhance the community experience. The discussion experience after articles will be better and we look forward to seeing an increase in conversation as a result. Of course the Techzim WhatsApp groups will continue being places were the conversation continues round the clock and a place were relationships are formed.

One of the most common problems we picked from your feedback was that it was quite difficult to discover content on Techzim especially those articles that explain how to do stuff . The search bar was hidden to most people and the navigation was not very intuitive. We hope we have improved on this and hope that you can quickly find any particular piece of content you want on Techzim.

Let me end here. This was just meant to be a heads up so you don’t wake up to an unfamiliar Techzim without an explanation. Hope you will enjoy the new look.

4 thoughts on “Techzim Is Getting A New Look”