The ongoing controversy of targeted bulk SMS by Zanu-PF aspiring candidates is nothing short of drama. The notable burning questions which were raised out of this drama were, “Where did Zanu-PF get the database?” and “What does the law say about accessing people’s data and sending unsolicited SMSes?”

Naturally, people (initially) accused Zimbabwe Electoral Commission (ZEC) of being an accomplice in this drama. But at a press briefing yesterday, ZEC Chairperson, Priscilla Chigumba denied the allegations saying that they didn’t “leak” peoples information to Zanu-Pf. And she promised that ZEC was going to conduct an investigation to ascertain what really happened.

Then ZEC insinuated something quite alarming during the press briefing. It said that Mobile Network Operators (MNO’s) could have sold the database to Zanu-Pf as a way of generating (additional) revenue from companies who send bulk messages.

Of all the MNO’s, Econet was put in the line of fire, being accused of selling their database to Zanu-PF simply because its customers (only) received the ‘targeted’ SMSes. However, Econet quickly refuted ZEC’s statements saying that it doesn’t sell or give customer data to any third parties except to Potraz as part of the regulatory requirements.

After Econet and ZEC denied selling or giving their database to Zanu-pf, people dragged POTRAZ into the drama. Since POTRAZ is a regulatory body which has unlimited and unreserved access to MNO’s databases, people implied that it (POTRAZ) may have colluded with Zanu-PF. POTRAZ has access to the MNO’s database as the MNO’s submit their databases quarterly as part of POTRAZ’s compilation of mobile registration statistics.

Techzim managed to contact POTRAZ about this issue asking whether it gave a database to Zanu-PF (or for that matter, any political party). Anyway, POTRAZ denied the accusations and went on to say that it didn’t sell customers database.

Responding to a ‘ tweet’, POTRAZ made it clear that MNO’s were not allowed to sell the database of their subscribers as they were mandated to uphold subscribers privacy. 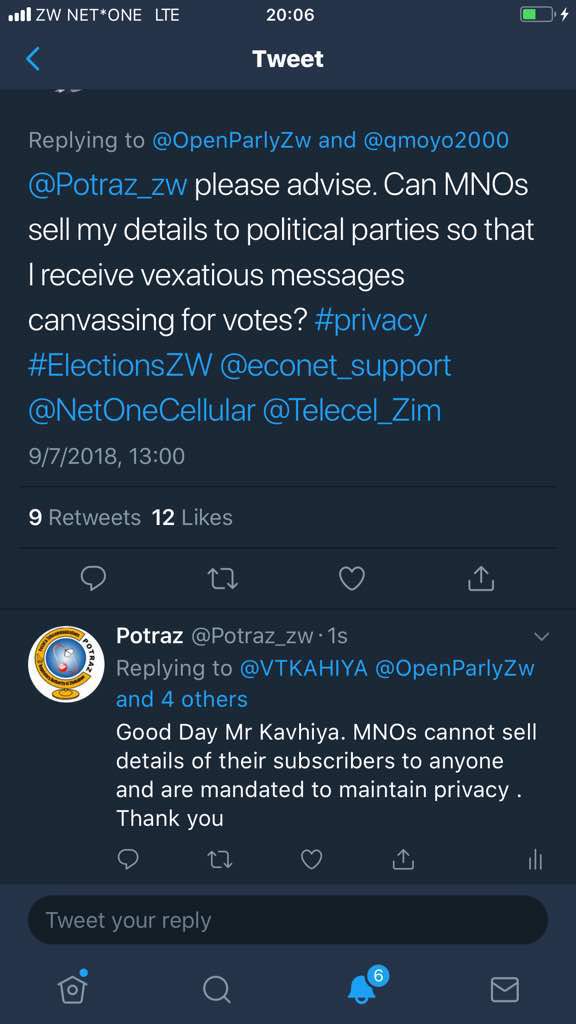 Techzim Goes a step Further, to ask the Zanu-PF candidates

We have just called the Zanu-PF candidates whose names were in the bulk messages.

The first candidate said we shouldn’t have called him but instead call the number which sent the ‘targeted’ messages and not his number which was inside the message. The problem is that we can’t call the sender of the message because there was no number where the SMS came from. The sender was only written as President (as shown below). 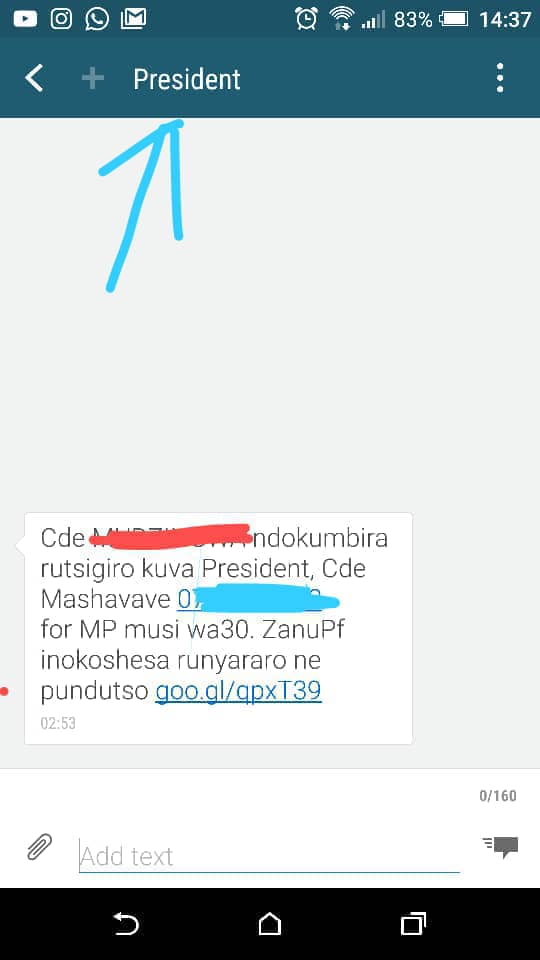 The second candidate we called, said she didn’t even know (before we called her) that her number was being sent to people asking them for votes. So it came as a surprise to us that even the candidates themselves are not aware of these ‘targeted’messages.

3 thoughts on “What do POTRAZ And The ZANU PF Candidates Who Sent Unsolicited Messages Have To Say About Accessing People’s Data?”