Netone’s Chief Eexucite officer (CEO), Lazarus Muchenje has just been suspended until further notice for exercising poor corporate governance in the sacking of senior managers. Just two weeks ago Mr. Muchenje fired 9 executives for an undisclosed reason and last week he reversed the decision with the 9 being reinstated again.

Netone’s board chairman, Peter Chingoka letter to Mr. Muchenje stated that the suspended CEO was to hand over all Netone assets in his possession and immediately stop visiting the company’s premises.

The board shall immediately investigate the above allegations after which you shall be informed of the results of the investigations…..You are directed to hand over all company assets in your possession to Mr. Toro immediately upon  seeing served this letter

Mr. Chingoka’s letter was served just after Mr. Muchenje had filed a court application suing, ICT & Cyber Security Minister Supa Mandiwanzira, NetOne, 6 board members; 9 executives (who were fired a few weeks ago) and The Office of the President and Cabinet for various reasons.

With all these twist and turns  Netone didn’t take much time to find a person to fill the vacant position by immediately appointing Nkosinathi Ncube as the new CEO. 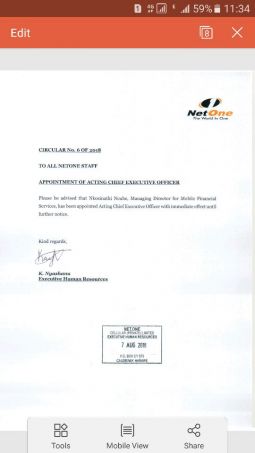 Could Mr. Muchenje end up with the same fate the former CEO, Reward Kangai faced just a couple of years ago?

One thought on “More Twist And Turns : Netone Suspends Its CEO”