You know the saga Netone is currently involved in. The state-owned telecoms operator, Netone suspended its Chief executive officer, Lazarus Muchenje for undermining the authority of the board through his sudden dismissal (and reinstatement) of 9 Executives some weeks ago. Before his suspension, Mr. Muchenje had filed a court application suing the minister of ICT and Cyber Security, Super Mandiwanzira (and other 4 parties) for illegally involving himself in NetOne’s running.

To add fuel to the fire for Mr. Muchenje, today, The Herald newspaper published a story which is saying that Mr. Muchenje “ is reportedly facing criminal investigations in South Africa and the Democratic Republic of Congo over allegations of defrauding his previous employer InTarget Mobile Advertising of an undisclosed amount”. The Herald is basing this on an email it saw from InTarget Mobile Advertising chief executive officer M.r Norman Parking which said;

I became aware of the case between yourself and Lazarus Muchenje in the media. I wish to send this email to notify you of criminal investigations against Lazarus Muchenje in both South Africa and DRC, for defrauding the board and shareholders of his previous employer, Intarget Mobile Advertising. I wish to collaborate with yourselves to bring Mr Muchenje to task. Please make contact with me should you wish to explore this collaboration.

So is it true?

Before the report by The Herald today, we at Techzim received a screenshot of an email which was written the same text, verbatim, as the email The Herald’s quoted. The reason why we didn’t report about the ‘screenshoted’ email was that it didn’t seem to be legit because the domain name from which the email came from seemed wrongly spelled. Hence, we were doubtful about the authenticity of the email.  But it’s usual for company personnel to have email domain names which are different from their company’s actual name. 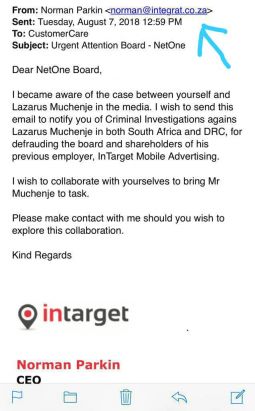 Regardless, it seemed like we would inadvertently engage our selves in smear campaign if we had published the email with so much doubt about its authenticity. And I think our doubts could be justified given that the Herald contacted Mr. Muchenje concerning the alleged criminal charges and the suspended CEO said he wasn’t aware of any charges from his former employer, InTarget Mobile Advertising.

However, Netone’s board chairman, Peter Chingoka seem to believe the authenticity of the email as he said the issue was being looked at. The chairman said;

It’s too early for me to comment. The matter is under sub-judice

Anyway, we have reached out to Mr. Norman Parking and InTarget Mobile Advertising concerning the issue to either confirm or deny the email and they are yet to get back to us. Furthermore, we are trying to contact Mr. Muchenje for more information.

2 thoughts on “Netone’s Suspended CEO Is Wanted In South African For Fraud Charges: How True Is It?”