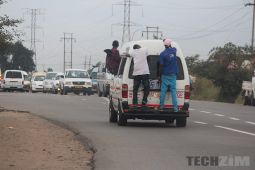 I knew about ZimRide, the Silicon Valley startup that launched in 2008 to solve public transportation problems in the United States. I knew that this startup was inspired by Zimbabwe after one of the founders, Logan Green visited Zimbabwe in 2005 and witnessed the Kombi transportation system we have had around for decades. We even covered the story here back in 2011.

What I didn’t know though was that the kombi inspired ZimRide was the precursor to Lyft which is the alternative to Uber in the US and other parts of the world. Actually calling them an alternative to Uber may not be fair since they went for the mass market with their ride sharing/hailing app before Uber. Uber started off with a limo like service for the affluent. In any fact ZimRide came much earlier than that.

It’s funny that we here in Zimbabwe, we don’t see kombis as ride sharing really. Anyway, I was glad to connect the dots between ZimRide and Lyft when I listened to a podcast interview of John Zimmer, the other Lyft co-founder. This then reminded me of conversations I have been having quite a lot with a colleague.

The morning and evening logistics nightmare

So my colleague lives in Ruwa and of course works in Marlborough (yeah that’s where we are), His wife works in Borrowdale and their son attends school in Avondale. All three of them use one car, start work/school at the same time. Well not exactly true for my colleague: we are flexible on time and he could work from home if he so wished.

The bigger nightmare is later in the day because the son finishes school at 1 in the afternoon and sometimes at 3, the wife at 5 and as for the guy just as he can come into the office at any time, he also can leave at any time but sometimes that means he will be far from done when the clock chimes 5pm.

We don’t think this is a problem faced by just one family. Some are solving it of course by car pooling school runs. However, little clusters of people solving this problem independently of each other is not efficient. Moreover, if you don’t have neighbors with kids who go to the same schools as your kids or at least close or if you are just not neighborly then you can’t participate in that economy.

Still, if you solve for the kid or kids it still leaves mom and dad to solve logistics. Solving logistics may involve one spouse extending time at work just to wait for the other. If they work in a place where they lock up the building then scrambled eggs… Besides, having to ask your spouse to wait for you after work every day is the stuff that may just get you to visit tete, pastor or some other marriage counselor.

There is always the kombi

Also, if the child in question is a first grader you are not too comfortable having them navigate kombis even though in all their first grade wisdom they assure you that it’s a piece of cake.

Maybe let’s be inspired by the guys we inspired

There are a few (by few I mean too many) startups trying to be Uber or Lyft in Zimbabwe but I am not too sure of their chance of succeeding. The problem I see is that they are attempting to just replicate the said Lyft and Uber. That’s a problem: Uber and Lyft did not start as Uber and Lyft!

Uber started as a service for the ‘American aristocracy’ and Lyft started as ZimRide, mainly targeted at university campuses. Traction does not come from attempting to solve a problem broadly at once. It works when you do that sometimes but that’s the exception that proves the rule.

If there is going to be an Uber or Lyft in Zimbabwe that is not Uber or Lyft (those two can use the power of brand and lessons learnt etc to just solve broadly, so can Taxify), it has to start off solving a very particular pain. School run could be one such pain to solve. The problem of trust can be solved by using the schools themselves and the community of parents that are associated with schools as well as user reviews and such that Uber and Lyft employ. The internet has allowed the distribution of trust in a way that makes commerce work.

Ride sharing on the commute to and from work is another obvious one. A lot of people don’t offer lifts to people flagging for one on the side of the road. Well, because sometimes those people almost rip your car door off. There are other reasons of course but a good number of these motorists who don’t pick up people flagging lifts would be willing to get the extra buck if presented in a neat and easy to use technology.

In short, ride sharing should start off very simply and by solving a very distinct problem not just trying to launch an Uber because zvine mari. Uber yacho is not profitable yet in the first place so that should tell you something.

I saw the same craze with social networks before. Young Zimbabweans were rushing to build Facebooks. It is not impossible to build a Facebook or Uber for Zimbabwe or the region but it has to start from a particular problem. There’s a a reason why Facebook started as The Facebook for Haverd students.

Econet is a bit close

Econet is of course attempting to get into ride sharing through Cumii. They are starting from a sober position and big advantage of having first to solve their own problems. Yes, they want to be their own first and big customer. That’s the Amazon approach and it works. Cumii did that with their technights as well. There were a lot of Kwese satellite dishes to install and so Econet could be it’s own customer for the handyman app.

Note, I said a bit close. I have reservation about how Cumii is approaching this and other problems they are attempting to solve. I hope I will have time in future to explore their model and where I am bearish about it.

For now, someone please get inspired by the fact that Zimbabwe inspired Lyft. By the way, ZimRide still exists- the Lyft guys sold it when they pivoted to Lyft.