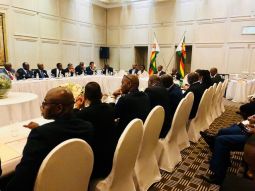 New Zimbabwe Minister of Finance Professor Mthuli Ncube has embarked on a listening and consulting roadshow with stakeholders, starting with a private meeting with captains of industry. Today, he met with fifty chief executive officers of the leading businesses in Zimbabwe to consult and listen to the challenges they are facing operating in Zimbabwe.

The Minister of Finance and Development and the captains of industry discussed possible solutions to the challenges the business leaders are experiencing operating in Zimbabwe. The Minister promised to take into account the issues raised and proposed solutions as he kicks off his mandate to make Zimbabwe a middle-income country by 2030.

Chief executives and senior business leaders that met privately with the minister today came from the following companies:

We hope he engages start-ups soon also, they equally need his attention.