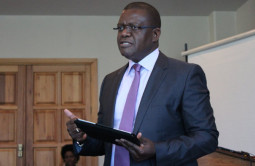 AMH has been granted a Content Distribution Services licence. The media house now has three licenses considering they were already awarded a VoD and Webcasting licence.

The content distribution services licence allows AMH to compete with DStv, Kwese and whoever else set up camp in that field. There are a few contenders mind you; Azam, Zimpapers and Dr Dish also obtained this licence.

Is this the future?

If I’m being entirely honest I think BAZ started giving out the Content Distribution Licence a tad too late.

Though we celebrated when Kwese got the licence, it’s become apparent that having a licence is only one part of the problem. The more critical part of this whole equation is securing quality content that keeps people subscribed. Kwese has been struggling with this and it is beginning to garner a reputation as DStv’s substandard competitor.

The truth of the matter is; it takes time and resources to get quality content and unfortunately satellite does not have much time on its hands. This is why Kwese has been focusing more on Kwese iflix and their satellite TV offering has been taking the back seat of late.

Should AMH focus on VoD instead?

AMH face a similar problem and if I were them I would focus on the future; which is VoD. Yes, people will complain about data and the longstanding assumption is that the market is not ready to embrace VoD. But I don’t think embracing satellite which is on its last mile is the answer.

There is, however, the issue of the potential of untapped markets. In the event that the economy gets better and the general standard of living gets better there is a market (especially outside Harare) for Satellite TV to grow before VoD reaches these parts of the country.

If BAZ had issues these licences to distribute content years ago when people were still yearning for that I’m sure all these independent players would have managed to eke out their own space. It will be exciting to see whether or not AMH and Zimpapers line up new local quality viewing as part of their content selection.

The CEO of Heart & Souls Broadcasting –the subsidiary of AMH which acquired the licences- Mr Kangai Maukazuva did say he was excited at the potential offered by young creatives:

We are excited by the opportunities presented to young creatives locally and in the diaspora. We will be able to offer content creators, entertainers , musicians platforms to add to our dynamic culture and shape our narrative. It is time for Zimbabweans to tell their stories to the world.