According to Android Police, YouTube has been testing a new ‘Stories’ feature for some weeks that looks and works similarly to the identically-named service on WhatsApp and Instagram. While the test was only limited to very few users initially, the company is now apparently rolling it out to a wider user-base. Alas at the moment its available for IOS users who would have upgraded their YouTube app. 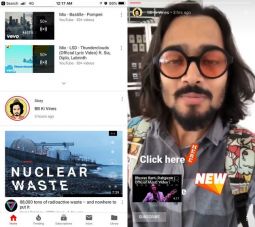 From what we can see, the Stories section in YouTube looks a lot like that of Instagram’s in terms of User Interface, but one of the ways one would be able to distinguish between the two is through the red-ring (seen around BB ki Vines‘ profile picture) that surrounds new Stories on YouTube.

YouTube is the latest online platform to have jumped on the so-called ‘Stories’ bandwagon after WhatsApp and Instagram and Facebook popularized the feature over the past couple of years. It was originally introduced by Snapchat back in 2016 and has since been introduced by many of the aforementioned social media services, among others. With this feature, YouTube is likely to be trying to increase user engagement on its video sharing platform than just following in the footsteps of other social media platforms.

Not much is known about the feature on YouTube’s platform, but with YouTube rolling it out to more users, it is probably only a matter of time before it’s turned on universally in the days to come.