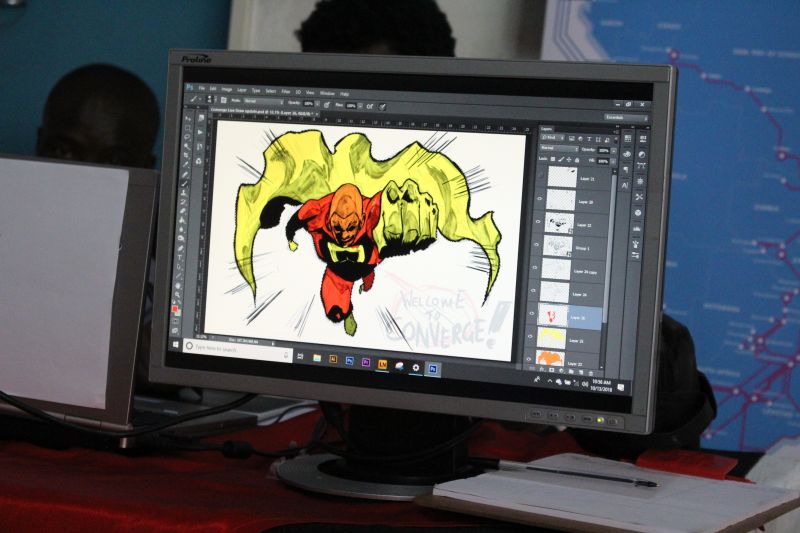 Yesterday we were at Comexposed’s annual event which is now called Converge. The 2018 edition of Converge was pretty cool and here are some of the interesting things we stumbled upon;

AMH’s subsidiary Heart & Soul Broadcasting Services recently got a VoD licence and as it turns out they also have a radio station that’s been launched (not officially) and is streaming on Facebook and their website. If you’re tired of all the other stations we’ve been hearing maybe Heart & Soul Radio might be your thing from now going on…

There were some pretty impressive artists on display and  though some of the artists didn’t have websites, I’ll shout out the ones who did so you can check out their work for yourself

His art style is like a fusion of Africa in a futuristic setting (Afrofuturism he calls it)… You know what. Just follow Dananayi’s Instagram and see it for yourself because I won’t do his work justice if I describe it. You can also check out his illustrations on Art Station.

The artists are not required to prefix their name with “art of” that’s just a weird coincidence… Anyway, Tatenda Ndlovu is another Digital Artist and Illustrator who impressed me and you can check out some of her work on Art Station, Facebook and Instagram.

This was the comic that managed to impress me most and that’s because of the storyline which doesn’t run away from its roots… Mutupo is a comic by Kudakwashe Rwizi and the premise of the storyline is this; There are superheroes and villains and all these characters have their powers defined by their totem. So a character whose totem is an elephant would have raw power for instance. Anyway, you can read the 0 version of the Mutupo comic and see if that’s your vibe or not.

Afro Tokyo is another comic book produced locally and according to the writers it’s a fusion of manga and UFC (I hope I didn’t get that wrong) but they also had one of the coolest stands with an Xbox version of the immensely popular DragonBall FighterZ available to play if you bought their stuff. I love me some Goku so I had to go and see what they are doing. You can also follow their Twitter, and Instagram for updates.

I don’t know how many Animation studios there are in Zim but what I do know is that the ones who came through yesterday had some pretty cool stuff to share.

Dream Box Animation and Kakic Universe also get honourable mentions and I would encourage you to check out their stuff as well.

There was supposed to be Drone Racing but it ended up as more of a drone showcase as the wind was hell-bent on ensuring that no one races. The showcase was still pretty cool and we had Tawanda Chihambakwe from Drone Racing Zim showing people the drones and letting those who are interested have a go. I flew a drone for the first time but even though I was terrible, I can rest assured knowing next time I won’t be the one looking like an amateur…

So that was it… Of course, that’s not everything that happened at Comexposed but these are the things that spoke to me and hopefully, 2019 Converge will be bigger and better. Oh and next year we need more Cosplay contestants or is it cosplayers? Either way, you get me…