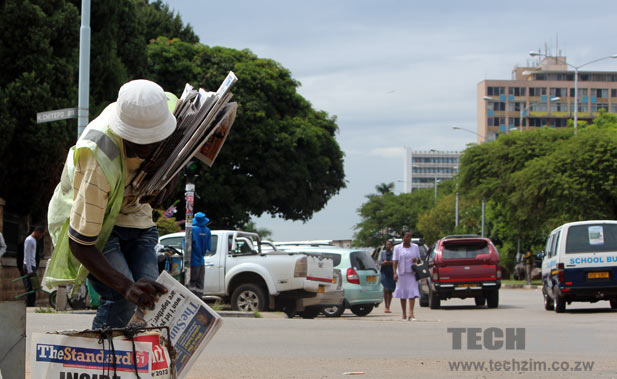 Well, what started out as mere complaints around price has now escalated to become something much more sinister and as always social media has played a huge part. And let’s just say things are getting heated…

So AMH –the company that publishes the NewsDay and other papers – increased the pricing of their papers because the economy has been on a downward spiral for the past few months. It was an understandable decision (to me at least), I mean they have costs which were probably rising and they also have to pay people who buy in shops where prices were rising rapidly. But calm heads rarely prevail and people were quite pissed off.

Many declared that they would stop buying the papers at double the price they were used to. The Deputy Minister of Information, Publicity and Broadcasting Services Energy Mutodi called the AMH out and declared that he would ensure that prices of newspapers would not be changing. He tweeted:

NEWSPAPER PRICES TO REMAIN AT $1: Following a gvt directive for unscrupulous businessmen to stop hiking prices, I am urging all newspapers to stop flying along the wind & keep their prices @ $1. The media industry shall never be subject to speculative behavior under our watch.

Earlier this morning, vendors selling newspapers from AMH are reported to have been attacked and their newspapers burnt and Trevor Ncube also took to a series of tweets to air his thoughts and clearly he feels the deputy minister is behind these attacks;

Do I think such issues should be handled on Twitter? Nope, especially when both Trevor Ncube and Hon Mutodi are involved in the same field and could have just had a face to face without having to.

The negative side of social media keeps making appearances

We are in a nation that’s politically divided and using social media to fuel these fires (no pun intended) is what could ultimately lead to strict governance when it comes to social media and the internet. For a while now social media’s has been rearing its negative head and trust me if you give the government a reason to act out and tighten their grip on something they will. Whether they are right or wrong to do so is another discussion entirely.

The Deputy Minister is yet to respond and I truly hope he doesn’t respond via social media and they can resolve this more diplomatically.