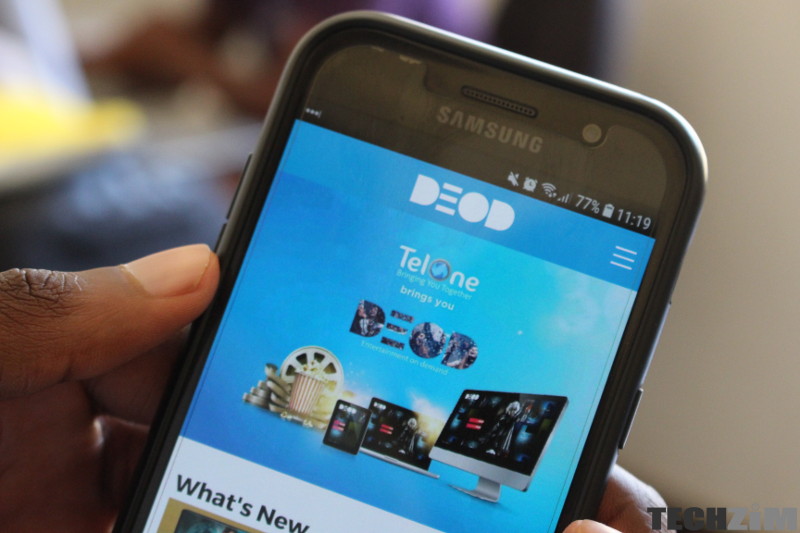 Having looked at the content being offered on TelOne’s new DEOD streaming platform it might be best to now turn our attention to pricing. We are going to compare DEOD to Kwese Play once again as that’s the most similar service. We’ll also look at DEOD’s other packages along with Kwese’s revised pricing for the iflix service.

TelOne’s premier streaming offering is very similar to the one offered by ZOL in that both services are hybrid-services that offer both on-demand content and 24-hour television channels. Because that’s the case these tend to be more expensive than on-demand content in isolation but also they are the most comprehensive of the two.

Because the pricing structures offered by both services are different we won’t be tabulating the prices.

The most expensive DEOD package offered by TelOne will set you back $11.99 for a month’s access. For TelOne subscribers streaming data will be free which means that you only have to worry about the data to subscribe. If you’re accessing DEOD through other internet providers (which doesn’t seem to be possible right now) you’ll have to pay for the data to stream as well. This has been the biggest stumbling block thus far as data is very expensive this side.

Unlike Kwese Play, you can also access DEOD for a week, or a weekend and you’ll have to part with $4.50 and $2.50 respectively.

DEOD premium gives you access to both on-demand content (the tv shows and movies you can stream whenever you want) and the more traditional tv channels that have daily programming routines. And they do this at a cheaper price than Kwese Play. Though there are variations in content being offered.

Because Kwese Play comes with a set-top box you’ll have to fork out some money for that device as well. For the first month, you are required to pay $89 for the Kwese Play Box + subscription. After that first month, you’ll only have to pay $18 each month. The first 12 months of iflix content are also free (at the time of writing) which means you’re getting loads of value, granted there is content that you like on Kwese Play. Your bucks will get you access to a hybrid of on-demand (iflix) content and TV channels (Kwese TV) and like DEOD this content will be accessible to ZOL subscribers for no extra data.

Econet also offers bundles for users who want to access Kwese services at a cheaper rate. The following top-up bundles are available to Econet customers only to watch KweseTV related content; 2GBs ($2),10GBs($10) and 35GBs($35). This doesn’t include iflix content so there’s a bit of a compromise there.

The fact that Kwese comes with a set-top box makes it a better offering compared to TelOne’s DEOD offering which will probably be taken up more on laptop’s and smartphones. Of course, people could always buy set-top boxes but that’s another layer of friction and something that deprives consumers of convenience.

The section of TelOne’s DEOD content that has actually excited me most has been the movie section, especially the movies available for rental. DEOD gets recently announced movies 3 months after their release and viewers can rent these movies for 48 hours once they are available on their platform.

Movies will be priced as follows on the platform:

DEOD’s On Demand offering is structured similarly to Kwese’s iflix. There are tv shows (maseries) along with movies and you can watch these whenever and wherever. The 24-hour channels are scraped from this offering but unlike iflix, DEOD does offer music (over 250 songs and albums).

How much do you part with to access DEOD on demand vs Kwese iflix?

TelOne doesn’t offer bundles to access their DEOD bundles but they still offer free streaming to subscribers using their internet which is not the same for ZOL users and Kwese iflix. DEOD also offers NetOne and Telecel an opportunity to collaborate and create bundles for their subscribers and they can have a slice of the cake as they don’t have VoD licences and can’t offer these same services.

DEOD TV is a more streamlined offering which offers TV channels but still relies on streaming. I would only recommend DEOD TV if you’re a News junkie as the tv shows/movies are stripped away from this offering.

DEOD is only offered in one package: a monthly fee of $8.99.

Let’s wrap it up…

In my opinion, the pricing for both services is quite fair but the only problem is that the content offerings are just not that enthralling. Econet has been saying they’ve already had over one million sign-ups for iflix so that could suggest that people are enjoying what’s on offer or it could mean people rushed just like they did with Kwese TV and then after abandoned the service. What has been your experience with iflix after signing up? Oh and will you be signing up for TelOne’s DEOD service?