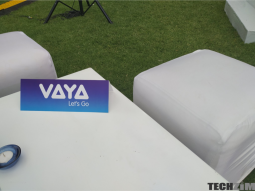 If you have been one of those people waiting to try Econet’s ride sharing Vaya App for some reason you should go ahead and try it because the service actually works and the first ride is indeed free. Last week I took my first ride and for the most part the service worked as expected.

So about a week ago I decided I was ready to take my first ride sharing journey. I have always envied those who live in countries where there are services like Uber and Lfyt. Although I have installed both the G-Taxi and Hwindi apps on my phone I have not yet used them. Nothing beats apprehensiveness than a free sample so these services can learn a lot from the way Vaya is trying to penetrate the market.

The Vaya App was already on my phone and I had received the free ride coupon via sms. The coupon entitles you to a free ride  of up to $9. What this means is if the cost of your first ride exceeds $9 you will have to pay the difference and if your cost is less than that your coupon will be used up in its entirety by the first ride nevertheless.

I had been send on a shopping errand and being a perennial pedestrian this meant I had to hurl the grocery around. Feeling lazy I decided to give the Vaya App a try. I launched the app, entered my coupon, left my pick up point untouched as the app was using GPS for this and entered my home address, selected basic and tapped on request ride.

The request was accepted by one of the cars after about 30 seconds. The driver, according to the app would arrive in 4 minutes. It took him about 9 minutes and that was through no fault of his own. The app uses Google maps to guesstimate and while this gives you an idea don’t take it as gospel.

The car colour and plates can also be very useful as they will allow you to identify your ride when it does arrive. Again Google Maps is not very accurate when it comes to giving your location to the driver especially if you factor in iffy GPS. My driver parked across the street a short distance from where I was standing.

After putting my grocery into the boot I decided to ride shotgun and chat with the driver. Business was good he said and he was confident that the Vaya project would succeed especially given that it is an Econet child. He cited the free first ride promo as one of the reasons why the project seemed to be picking up steam. He also wasn’t aware that there were other similar apps and promised to check them out.

His major complaint was navigation. It was better in the CBD he said, not only because the data seemed more accurate and up to date , but there at least he was in his element and knew most nooks and crannies. According to him, in places like Kuwadzana the maps would point you to a location that could be as far as a 500 metres away from the passenger pick up point.

The Chat and Call features to the rescue

To be fair Vaya might have either figured this out or anticipated this based on experiences people have had elsewhere with Uber and like services. They have included a chat feature that drivers and passengers can use to communicate before the ride commences. This can be quite useful when it comes to directing the driver to where you are. It is also useful when the driver wants to assure you they are coming to pick you up especially during congestion periods.

It was a pleasant ride then it got weird

So we navigated and fixed the things that Google did not see such as a road that was closed a long time ago we finally arrived at my gate. The place that was marked as my destination was a good 200 metres away. That was not even the weirdest part, when I got the invoice I got the shock of my life. Apparently I had been driven to Borrowdale!

Fortunately I was the one who had directed my driver and knew this was my gate. This can be an issue for people who don’t know there are going. I can see people starting fights over this.

Clearly something is wrong with the API that Vaya is using. And its not just an issue that is unique to Vaya. The Dial A Delivery app gave me the same information despite the fact that the address is actually a whooping 17.5 km away. It cannot be a GPS issue either since all the phones I have installed the two apps on continue to give the same address. I have never even been to number 9 Malcom Drive Borrowdale either.

In fact when I tested Dial A Delivery I was told I was out of bounds! This is despite the fact that I live very close to like 7 fast food chains. When I checked my address in Dial A Delivery I got the same address 9 Malcom Drive what in the name of Google is going on? This bug does not seem to affect the actual Google Maps app which clearly shows my address and location as Mbare.

I think Vaya is going to catch on. Last night when my wife requested her first ride she could count as many as 50 cars available at that late hour. Then there is also the matter of a good fare estimate that does not require you to haggle with the taxi drivers as we are used to. I can also think of things like taking a Vaya ride from Road Port early in the morning without fear of my driver turning into my robber.