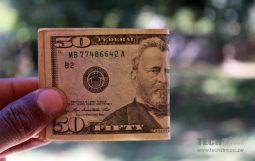 The phrase “Cash Is King” doesn’t just apply to investment portfolios, apparently, it also applies to the state or quality of your cash (in this case, the state or quality of your US Dollars). I can conclude that a bulk of the US Dollar notes (USD notes) that are in circulation in Zimbabwe could be deemed worthless in South Africa. “Worthless” because they won’t be accepted at some forex currency exchanges in South Africa hence you can’t exchange them for Rands to do your shopping.

Last week, we as the Techzim crew, had a good time in Cape Town attending the just ended, AfricaCom 2018. We thought it wise to carry our USD notes and exchange them for Rands in South Africa. It was a task that we set upon ourselves to execute as soon as we arrived at the airport.

The first Bureau de Change we visited in the airport declined to accept some of our USD’s on the pretext that they were dirty.  You know those USD notes we see money changers holding in town? After being held in sweaty palms for the whole day they get dirty. It’s those dirty notes that are not accepted in South Africa. We visited another Bureau De Change two days later and it declined some USD notes for the same reason. So, two the Bureau de Changes only took the clean ones (USD notes) and returned to us the dirty ones.

This shocked me (us)-USD notes are deemed not fit for exchange because they are dirty. This is unheard of in Zimbabwe, we use those kinds (dirty USDs notes) of USD without any regard to whether they are dirty or clean.

We were told that the only place that could accept such kind of (dirty) notes was in the ‘streets’, thus with money changers in the streets of Cape Town. But you know how South Africa is, it’s a dangerous country. The same people whom you would have exchanged your USD notes for Rands might scheme to mug you.

Anyway, the USD notes that were declined at the Bureau De Change were not torn, they were just dirty. And its not like they were awfully dirty such that you couldn’t see watermarks. No, they are those USD notes we use or rather see daily in Zimbabwe. This got me thinking: Does that mean that a bulk of the USD notes we are using Zimbabwe right now are (worthless)?

To answer this, let’s look at what the Federal Reserve’s policy on what is deemed as unusable money. This unusable money is technically called “Mutilated money”.

The United State’s Federal Reserve’s policy on U.S. money is something you should be aware of before you start traveling abroad. The United States considers damaged USD notes to be a USD note where half or less of the USD note is remaining, or the value of the note is questionable and must be examined by the Department of the Treasury before any exchange is made.

So, in other words, if a USD note you have is “soiled, dirty, defaced, disintegrated, limp, torn, or worn out” but more than half of it is remaining, the U.S. does not consider that USD note to be mutilated and it will still be accepted.

Although what the U.S. considers to be “mutilated currency”, might be of a higher standard than other countries, but at least you now have a good idea of what to expect of countries when you travel. They are some countries like Zambia which I visited 2 weeks ago, we didn’t have trouble to change our dirty USD notes. But to be safe, when you travel to South Africa or abroad with USDs, they must be in the most crisp, pristine and well- kept condition to be accepted or even exchanged at local currency exchanges.

P.S You might ask why we didn’t go to exchange our dirty USD notes for Rands in a bank rather than going to Bureau De changes. The thing, is there are a lot of requirements and paperwork you need to fill out just to exchange forex for local currency at a bank. Bureau De Change have less stringent rules for exchanging currencies relative to banks so their turnaround time is much higher (compared to banks). Otherwise, if you have enough time and you equally satisfy the requirements of banks, they can accept even the dirty USD notes too.