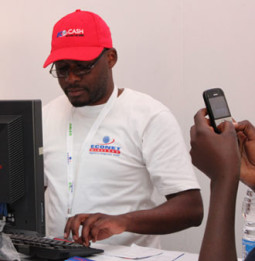 Over the weekend, several people experienced some problems using their EcoCash, including two of my colleagues here at Techzim. The problems were characterized by failed transactions which entail someone’s Ecocash being debited (taken money) but the merchant’s account not confirming that it received a payment.

I suppose this problem didn’t make much noise because it only happened to EcoCash users who tried to make payments when a merchant dialed their number on the POS so as to produce a prompt on their phones. Otherwise, if you tried to make payments by dialing the USSD or using the EcoCash app, you wouldn’t have experienced ‘failed transactions’.

After experiencing that, one of my colleagues got refunded his money on Monday morning. To no surprise, he was refunded just the amount he had tried to pay to the merchant, that is, $31.74. Allow me to use my colleagues’ case as an example on behalf of everyone (me also).

Now here is the issue, paying $31.74 gets you charged around $1.32 in transactions fees. But EcoCash only refund him $31.74. What about the $1.32 transaction fee? He should have been refunded that because he didn’t buy anything. After all the problem was theirs, not his, as their system was at fault in failing to process his transaction. Instead, EcoCash should refund have refunded him ($31.74+$1.32) $33.06.

Wait! there is that awful 2% tax which is charged for any transaction of $10 and above. So on top of that transaction fee, you are charged (by the government whom EcoCash collects on its behalf) 2% for a failed transaction. That’s doubly unfair, isn’t it? As we pointed out above, its EcoCash’s system fault not the customer’s so EcoCash should not only refund the paid money but also refund the transaction fee and 2% tax. In my colleagues’ case he should have been refunded: {$31.74+$1.32+($31.74×2%)} 33.72 (Don’t pay particular attention to the correctness of my math, it’s just a point I want to put across in mathematical terms).

Some may say the transaction fees and 2% are not that much to whine about. But that’s much to some of us (myself in particular). And behold, those seemingly few cents (transaction fees) are the ones that make EcoCash (the company) accumulate profits. So I won’t listen to that argument which says $1.32 is not that much.

It may not be much if you don’t consider that you have to pay for a kombie to go to an EcoCash shop or drive to an EcoCash shop. Actually, I even think that EcoCash should cover that too. Yes I mean they should also pay your (busfare or fuel cost) for coming over to their shop to get a refund of a failed transaction. As I said twice, it’s their system’s problem, not ours.

But I suppose that’s too farfetched and too much to ask from EcoCash. They can’t give everyone who comes to claim their money, bus fare or fuel money. Rather, the best thing is for EcoCash to be innovative and resolve customer issues (like failed transactions) online. That way customers will be spared the trouble of walking or commuting to an EcoCash shop.

I understand that the issue of data comes into play here. Some will say they wouldn’t have data to go online and try to get their refunds. I guess EcoCash will have to develop a new app (dedicated to solving EcoCash issues) and ask Econet to Zero-rate it. Or a solution for those without smartphones in rural Zimbabwe, EcoCash could perhaps come up with a USSD code that customers can use to get their issues resolved. Frankly, I’m not sure how the USSD solution would work, I’m just wildly speaking.

Anyway, my simple point is that EcoCash should refund us the transaction fees and the 2% tax as well. Period!

6 thoughts on “EcoCash Should Refund EcoCash Charges To Customers For ‘Failed Transactions’. Agreed?”