Google’s Digital Wellbeing feature got a lot of slack when it started rolling out. Many doubted it’s effectiveness (myself included) but now, having used the application I can safely say it’s genuinely useful. On Sunday I updated my phone to the latest version of Android (Android 9 P for the uninitiated) and later on that day I stumbled upon Digital Wellbeing. I didn’t touch any settings or pay it much mind. I only got to see how useful it can be in tracking your habits and informing you of what you may need to change if being as productive as possible is a priority.

How much time do we spend on our phones?

Towards the end of the day yesterday, I was surprised to learn that I had actually spent just above 6 hours on-screen. There was also a breakdown of which apps had consumed most of my time along with the number of notifications I received and the number of times I unlocked the device. I received over a thousand notifications over the course of the day (the bulk of which were from WhatsApp) and unlocked the phone 146 times.

Without Digital Wellbeing I would be aware of the fact that I’m being distracted by my phone but with it there are CLEAR numbers. Numbers I can actually work towards reducing as I have the data with me all the time. You can now become very conscious of your usage habits and then choose to either ignore, increase use or reduce use. 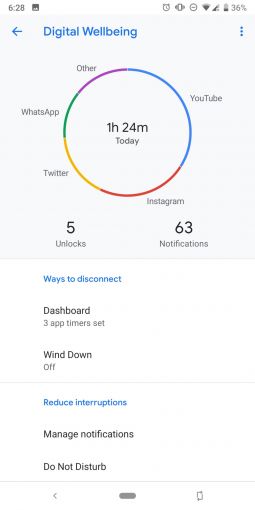 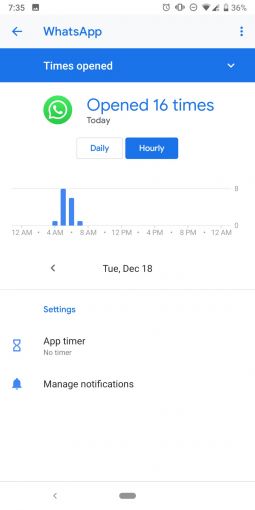 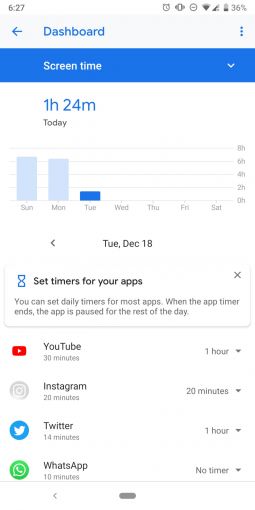 Notifications are the bane of a 21st Century existence. Often when notifications come you’re tempted to pick up your phone and check what it is and this usually turns into something else. Where you were quickly going to check the notification and move on, you get a really interesting message that you have to reply and after replying you somehow find yourself on Twitter watching strangers argue about some useless thing. Time wasted…

Digital Wellbeing comes with some pretty interesting controls for notifications. For example, if you have two Twitter accounts –one work and one personal- you can turn off notifications for one particular account. This means if you are a social media manager you can have work tweets only bringing notifications and then personal notifications are blocked and then vice-versa once you’re done with work. 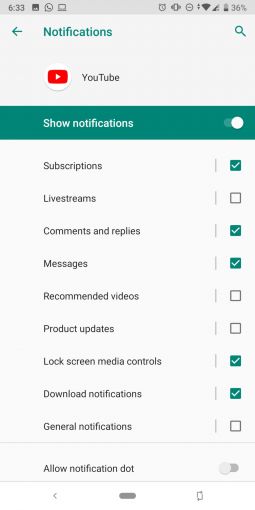 This granular control extends to the notification LED. You can choose which apps are allowed to use it. The LED really grabs attention and by filtering out silly applications and their silly notifications you’ll find yourself getting distracted far less than usual.

Locked out of your own phone

Digital Wellbeing’s most interesting feature for has to be the app timer. This allows you to limit the daily amount of time you can spend in an app. If Twitter is your guilty pleasure and its stealing time away from you can limit the time you spend on the app. Once you’ve passed your daily limit you’ll not be able to open the app and instead you’ll get a message telling you that you’ve exceeded your limit for that application for the day.

For some, it was a major frustration that if you exceed your timer you can just go to the settings and increase it and then open the app again. Personally, I’m not frustrated by that as I care to know how much time I’m spending on these apps and once I’m conscious I can start to pull back. I think staying away from locked apps won’t be too much of an issue.

So after having used all the aforementioned features during the day, Digital Wellbeing has one last trick up its sleeve to help you go to bed with 0 distractions. Wind Down is a combination of features that are meant to end your day as peacefully as possible. First up is Night Light – which changes the colour of the screen to an orange-ish hue as this is less harsh on your eyes at night. This can be scheduled to begin at any time you want but most people use it at night. 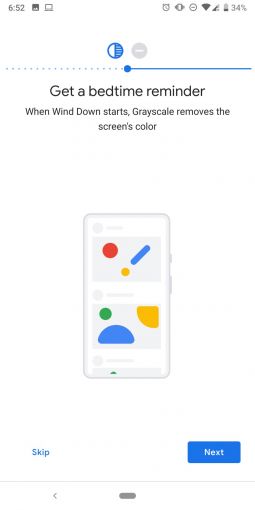 There’s also grayscale which basically turns your interface into this boring black and white interface. I describe it as boring because that’s exactly the point. The colourless interface is meant to make the distracting colours of apps look all the same that way you’re not drawn by colours (which happens on a subconscious level).

Finally, there’s the Do Not Disturb (DND) mode which hushes all incoming notifications. DND can also be customised to specific degrees. You can allow calls from certain people to ring, along with certain messages reminders and events. Usually when notifications come in you can see them pop up on your screen but when using DND you can set it not to show these pop-ups.

For me, the most impressive thing about Digital Wellbeing is the fact that though most of us knew we were wasting time on apps we didn’t know just how much time we were losing. Now you can consciously track and improve upon how you’ve been using your phone.

If you don’t have Android 9 yet, you can also read our article on Flipd; an app that actually works on lower versions of Android and similarly aims to help you put your phone down.