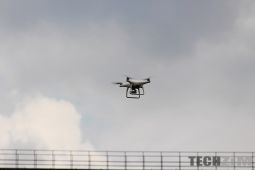 Drone fanatics now have a rulebook that means they can’t just fly their drones willy-nilly. The use of drones has lately been on the rise in Zimbabwe, with photographers, politicians (campaigning) and drone racers being at the forefront of this trend.

The regulations which were crafted late last year make it clear as to what entails breaking a law when using a drone in Zimbabwe’s domain. Alas, we haven’t yet laid our hands on the regulations; they haven’t yet been published online but we are working on getting these regulations for you. At the moment, let me make you privy of just a few regulations that we have managed to see.

The latest regulations are quite clear for those who want to get into the business of selling drones. The law requires the seller to notify (written notification) the buyer that they should get a license from the Civil Aviation Authority of Zimbabwe (CAAZ) . Failure to do that will see the seller languishing in the infamous Zimbabwe prisons for a maximum of 3 years. With this penalty, I’m sure the sellers will effortlessly comply. As written in the regulations:

No person shall sell a remotely piloted aircraft within Zimbabwe unless he or she has, by way of packaging label, or in the case of resale, by way of written notification, notified the buyer of the requirements prescribed by the Authority.

Who is allowed to operate a drone

Unlike in the US where 16-year-olds can operate drones, the new regulations say that only persons over 18 years are legally allowed to use one in Zimbabwe.

Costs of getting a license and operating drones

To get a license for your drone, you fork out as much as $50. That also goes for renewing your license-that’s going for $50 as well. Both the costs are not that much compared to other countries like the US where you spend at least $155 for the license as well as renewing it.

How long will the license be valid?

I haven’t yet met a country that charges for checking the airworthiness of a drone thus far. More often than not, the airworthiness is checked when a user gets a license to fly the drown or renew their licenses annually. So its safe to say that here the regulations went over-the-top.

If you watch Air Crash Investigation on DSTV you probably have seen that after an accident occurs, investigators invariably check for the pilot’s logbook. In case CAAZ wants to investigate, perhaps a criminal case involving a drone use, its now a requirement that drone operators keep a logbook of their flights. The logbook will contain information such as where the drone was flown, its course etc.

6 thoughts on “Here Is The Cost Of A Drone License, Minimum Age To Operate One And Other Rules For Drones In Zim”