Just with the coup that was not a coup, and typical of the era we live in, fake news and the current #ShutdownZim / #ZimShutdown has not been an exception. Yesterday we published a list of Twitter accounts and hashtags you can follow to keep abreast of things. Today we will share with you some steps you can follow to make sure that you quickly spot fake news.

It is important to note, before we begin, that while in the past decades most news organisations placed emphasis on being neutral and thus cover both sides of the story, nowadays that is a very rare thing. Almost every publication out there is partisan to a varying degree even the so-called official sources of information have an agenda. If you add in activists and bloggers ( the internet has made it easy to become a news organisation) then you get a lot of noise. It’s like drinking from a fire hose.

Can you spot what’s wrong with the Tweet below?

Now it is exam time. Can you spot what is wrong with the Tweet below. Leave your answer in the comments. 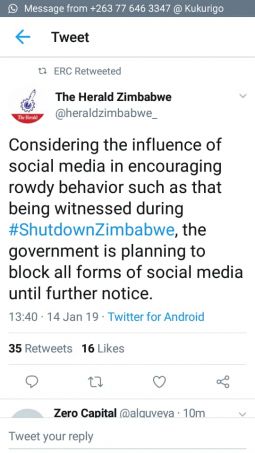