Samsung finally showed us the Galaxy fold in it’s full glory. A smartphone that unfolds into a tablet. Hello 2019! A couple of days later Huawei unveiled their own version of a foldable phone. The Huawei Mate X.

Now because this is something new you see very different implementations of the same thing. Samsung went for 2 displays. The inward folding 7.3″ and the outside 4.6″ folded mode screen. Huawei chose an outward folding design which, when closed you have 2 screens. One ‘main’ 6.6″ display and another one that acts as a viewfinder for your selfies on the side with the side bar. Open it up and it turns into an 8″ tablet.

Side note, OPPO also released their own foldable phone and it has a very similar design to the Huawei Mate X. 2 points go to outward folding. 1 point to inward folding.

Which Is The Better Fold

I’m thinking of 2 key areas here. Aesthetic design and Mechanical design. Since the Oppo variant is the same as the Huawei Mate X I will just use Huawei in my comparison.

Samsung’s design is an inward fold with a second display on the outside.  The outside display looks small at 4.6″ and leaves a plethora of bezel in any direction. Aesthetic wise it feels like not much effort was put into the user experience of the phone when it is folded. It almost feels like it belongs in 2009 with the Nokia 5230 Xpress Music.

Open it however and you get a nice spacious 7.3″ display…which has a cutout on the top right for selfie cameras eating into a bit of screen. Yes this tablet has a notch but it can also be hidden like we are now used to doing on smartphones with notches.

Since it folds inwards it is not really a perfectly flat fold because that would not be too friendly to the inward folding AMOLED panel. it maked the whole thing a bit chunky when folded but at least you can also customize the colour of the fold strip if you want something different. 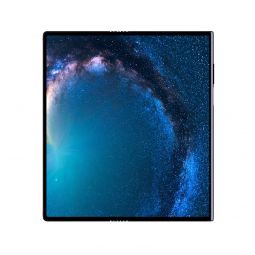 Huawei decided to use one flexible display for everything. This meant that the display has to fold outwards. Because it folds outwards this allowed them to make the fold a lot flatter. Flatter form factor meant it feels like a regular phablet when folded. Not the thinnest phablet around but quite compact for a foldable phone.

At one end of the smartphone is a sidebar that is home to the cameras. The cameras are always at the back weather it’s folded or unfolded and since they are on the side bar you have no notch on the display.

The main folded display is a 6.6 inch display with very tiny bezels. Quite a fitting aesthetic for 2018. Also once unfolded it extends to 8 inches of display. Did I mention there is no notch?

The Huawei in this round looks like the more complete device. All the elements play well together in harmony providing a more cohesive design approach to the foldable smartphone.

Right. To fold inwards or to fold outwards? That is the question. For Samsung an inward folding display makes sense for a couple of reasons. The flexible display is not made of scratch resistant material like Gorilla Glass. Glass is glass and upon trying to bend it, it breaks. This means they had to go with something like plastic which is transparent but also can handle flexing.

However plastic in as much as it does not shatter, it is very prone to scratches. An inward folding tablet would make sense on the durability side of things as when it is closed it is shielded from abrasive items that could otherwise redecorate the display.

The problem that then arises is if the display folds inwards, it cannot fold completely flat. It’s like taking a piece of paper and folding it flat. You’ll get a permanent line down the fold which you would not want running down the middle of a supposedly uninterrupted display.

So for Samsung it was sacrificing a clean design in favor of a durable one.

Huawei went with the outward fold and made a complicated hinge that allowed the Mate X to fold completely flat. This gave it a slimmer, more compact profile when closed which is more desirable.

Nonetheless the display is still a flexible one and so the material there is one that is soft and flexible. That said, the Mate X is more prone to damage and the whole display of the phone actually wraps around the whole phone making it the external body of the phone.

Huawei in this segment decided to go for a clean, good looking design at the expense of durability. It also explains why they also mentioned a protective case for it during their launch event. They know.

So back to the title of this article. Who did the fold better?

Considering looks, Huawei takes the crown. It maintains the current standard of a total full screen experience weather folded or not. It maintains a very compact profile when folded and does the multi display setup better (one display does it all).

Considering a durable design, Samsung takes this one. The inward fold means the more robust side of the phone encases the more fragile part when folded. This means in the long run Samsung’s implementation will fare better than Huawei’s implementation.

Do you think foldable smartphones are going to be replacing tablets or you really don’t care? Tell us in the comments.

8 thoughts on “Samsung Galaxy Fold Vs Huawei Mate X. Who Did The Fold Better?”