Facebook has finally started rolling a feature that allows users to delete sent messages on Messenger. This means you can now delete messages from everyone’s view on Facebook Messenger just like how you do it on WhatsApp. 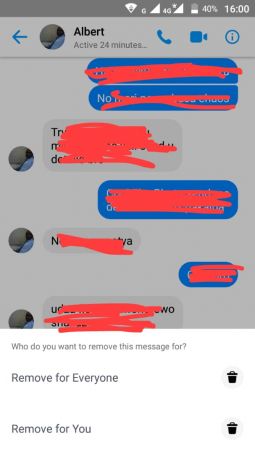 How does this feature work?

The retracting feature works just like that of WhatsApp, allowing users to delete accidental messages or media files (voice messages, photos, videos) from the recipient’s end. It makes the texts disappear from their end and displays a message saying ‘This message was removed’.

Of course, you shouldn’t be surprised that the feature works just like WhatsApp’s feature since Facebook is going to merge all of its platforms to make it possible for users seamless migrate from one platform to one.  However, you should know that the feature would only work when you use it within 10 minutes of sending a message, unlike on WhatsApp where you can delete it even 20 minutes later.

Why this time limit?

Facebook has added the 10-minute limit as a way to keep people from abusing the feature. As head of Messenger Stan Chudnovsky put it as reported by Techcrunch:

If the option doesn’t show up, wait for the update

The option works in individual and group conversations and is supported on both Android and iOS versions of Facebook Messenger. However, if it is still not available on your device, you might have to wait a bit as the feature ishas just started rolling out worldwide (in Zimbabwe it has been rolled out since I now have it).