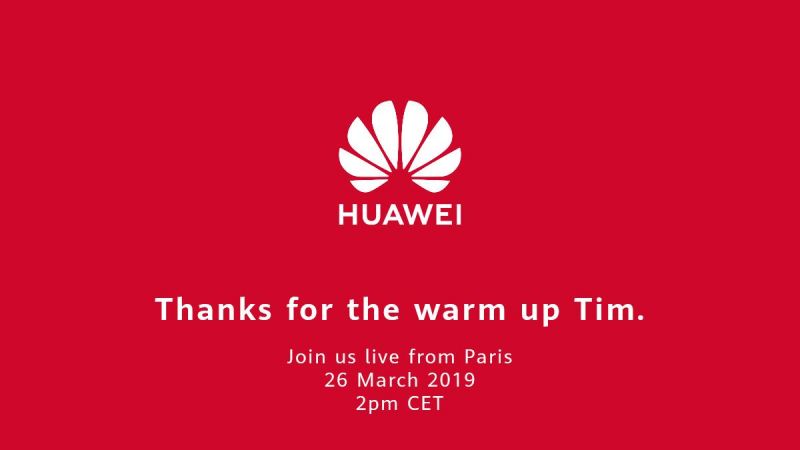 Unless if your Monday Blues were way too strong you would have known that Apple had their event yesterday. It was jam packed with a couple of software and service announcements that included a fancy new Apple Card made of Titanium, subscription based gaming service with no ads or in-app purchases and AppleTV+ with heaps of original exclusive content thanks to a partnership with some of the biggest names in film and tv. The likes of Oprah and Aquaman (Jason Mamoa)

But Apple decided to do what Samsung did about a month ago. Have an announcement just before Huawei has theirs. The results were no less different. Huawei Mobile Ireland Tweeted a photo with the caption, “Thanks for the warm up. Now for the main event”.

The photo was a tad bit more direct too as it actually mentions Tim, the CEO of Apple. You can check out the tweet below.

Huawei has had a reputation of actually living up to it’s claims. After Samsung released the Galaxy Fold, Huawei revealed an even more complete looking Mate X which a number of people thought was better looking and sleeker than the Galaxy Fold albeit being a less durable design.

All the more reason to be chuffed for their announcement today. They will be launching the Huawei P30 line of smartphones which usually get the best camera features. This time a promised 10x hybrid zoom is expected as well as the ability to shoot a video with 2 different cameras that have different focal lengths at the same time.

The announcement will be via livestream on YouTube at 3pm CAT. You can watch it on Huawei’s official YouTube channel on the link below

One thought on “Apple Is Huawei’s Latest Twitter Victim”