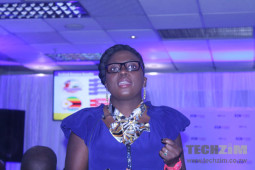 As you may know by now EcoSure launched a new product today – EcoSure Rescue Services. What may come as a surprise however is the fact that Natalie Jabangwe who is the CEO at Cassava Smartech’s subsidiary EcoCash was introduced as the Interim CEO of EcoSure. Jabangwe then took to the stage and gave a brief description of what EcoSure has achieved thus far.

What has she done prior to this?

Let’s talk about Natalie’s journey thus far. She has been at the helm of Zimbabwe’s most dominant mobile money company that she joined back in 2014. Prior to that Natalie Jabangwe studied Computer Science at Middlesex University. While in her second year, Natalie received a Leadership Exchange scholarship for the most excelling female student, a scholarship which earned her a place at Spelman College in Atlanta, Georgia

In terms of her other achievements, Natalie was nominated among the 100 Young Global Leaders of the World Economic Forum 2018. She was also a 2017 Fellow of The Archbishop Desmond Tutu Leadership Fellowship Program. Last November,  United Nations Secretary-General António Guterres appointed her to the United Nations’ Task Force on Digital Financing of Sustainable Development Goals. While at Spelman College in Atlanta, she interned in the office of the mayor of the city at the time, Shirley Franklin. Natalie is credited with developing Atlanta’s first information technology security policies in 2004, when she was just 21 years old.

Natalie is also a member of the newly established Presidential Advisory Council. This is a body of professionals from different fields that will advise President Emmerson Mnangagwa. It is not yet clear how exactly this organ will work but Jabangwe is one of the members and one of the youngest on the council.

EcoSure is currently being headed by Godfrey Mashiri as General Manager. The appointment of Natalie as Interim CEO is thus an interesting one. If this move does become permanent it will be interesting to see what she brings to the table at EcoSure and we wish her all the best.