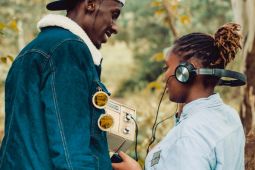 Many artists, I mean musical artists here, relied on radio and TV in addition to cassette sales back in the day. In case you were wondering, a was like this giant thing, the size of a laptop hard rive, that you had to stick in your radio in order for it to play music.

Lately, though traditional radio and TV have fallen on hard times. In Zimbabwe , artists were getting paid 25 cents every time their song was played on live radio. Even if we were to realign that we would still end up with about 75 RTGS cents.

That paltry amount is not even the problem, getting paid is. Last year we learned that ZBC owed artists about $600K in unpaid royalties. That’s over a million after we realign the amount. Also a in it takes 2 years for your payment to be processed last time I checked. Yes, you would be getting paid now for a song that was played in 2017!

It’s not just ZBC though, down in Mzansi SABC seems to be struggling to pay artists too. SABC owes artists a whooping R248 million-something like $59 million RTGS$. That’s a lot of moolah, ZBC lives in a country in economic dire straits- what’s SABC’s excuse?

Just like in Zimbabwe were parastatals rely on government bail outs SABC is patiently waiting on the South African Treasury to give them a hand out. Currently the national broadcaster is insolvent i.e. they owe more than they have in their coffers.

As things stand they do not have funds to operate past the month March.

One thought on “It’s Not Just ZBC, SABC Is Also Struggling To Pay Musicians”