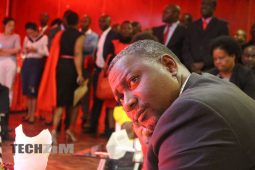 Former Minister of ICT, Supa Mandiwanzira who is facing criminal abuse of office charges has decided to approach the Constitutional Court to have the case against him nullified.

He is arguing that the Criminal Procedure and Evidence Act under which he is being charged is not constitutional. His lawyer, Thembinkosi Magwaliba says:

The section does not define what the duties of an officer are, as a result, public officers will operate in fear of transgressing that law because the decision as to what is abuse of duty, is entirely left to the police officers.

Mandiwanzira couldn’t have conducted himself in a manner contrary to his duties as a public officer because the duties are not defined in the Act and this endows police officers to determine what the parameters of the duties are.

He raises a good point

It’s true that this law is problematic. It is also a very curious thing that almost all of the few former ministers and public officers being persecuted at law are being charged under this piece of legislation. The Act says:

If a public officer, in the exercise of his or her functions as such, intentionally—

for the purpose of showing favour or disfavour to any person, he or she shall be guilty of criminal abuse of duty as a public officer …

Even the legal minds at Veritas have a problem with this piece of law:

The crime seems very broad in its scope – impossibly broad, in fact.  On the one hand it would cover a case where a Minister flouts proper procedures and orders his subordinates to award a government contract to a company of which he, the Minister, is the main shareholder.  On the other hand it also seems to cover the case of a magistrate who, out of a mistaken view of the law or the evidence, wrongly acquits an accused person.

In the first case the Minister is using his official position to enrich his company at the public’s expense;  it is only right that he should be brought before a criminal court and punished.  But in the second case the magistrate has made a genuine mistake, something that even magistrates do sometimes:  surely it would be wrong to bring him before a criminalcourt because of his mistake?

The Act which creates a criminal offence must be very concise, but that is not the position in terms of Section 174 (1) (a) (b), it is too broad. It induces a chilling effect in public officers. If there are no parameters defined in the Act, then every minister is a potential accused person. Such a law cannot be reasonably justified in a democratic society

I know some reading this here will start screaming that Mandiwanzira must be behind bars. Maybe he should, but it must be according to the law and the fairness of the law. There is a very bad precedence of no rule of law in Zimbabwe.

When those we perceive to be bad people are persecuted in an unlawful way we don’t care, we just want them to get what ‘they deserve.’ When those we have crowned as saints have authentic cases to answer before the court of law, we protest and absolve them. This is very immature and dangerous.

If Mandiwanzira has a case to answer, let him answer for it under the right legal framework. If he was a corrupt official, let him be charged under the proper laws that outlaw corruption not under a convenient piece of legislation that is vague in the least.

So we are clear, I am not saying Mandiwanzira is a good person or that he was a good minister or that he wasn’t shady. I am saying, our opinions of him shouldn’t matter, the law must be the law period.

The former minister says there is nothing that he did that was not approved by his bosses. He told the court he has already asked the Chief Secretary to the President and Cabinet, Misheck Sibanda to release minutes of meetings where approval to act the way he did had been given.

Mandiwanzira goes on to ask the court to order Sibanda to state on camera the contents of the meeting minutes he is talking about. Some of these meetings included the former president, Robert Mugabe says Mandiwanzira.

When all else fails, blame it on Uncle Bob…