Steward Bank has been hyping out launch of a new product today. Well, nothing new there. They are always launching and they are always hyping up their launches whether they deserve or not. This time from what we can gather this could be a different one.

Yes, the launch is hours late already. They wanted to do it live on Facebook but it looks like they are having problems doing that. Anyway, this gives us the conspirators time to probe and guess what they want to launch.

Comedians reveal what this could be

In their efforts to get the whole country tuning in to their Facebook Live launch which hasn’t happened yet, Steward Bank enlisted the Bustop TV comedians Gonyeti and Maggie. Yes, the duo that was recently arrested for posting stuff on Facebook.

Here’s the video Bustop TV did for them to invite all of us to tune in to the launch live stream:

Essentially what the duo are hinting at is a number that can allow you to do ‘anything.’

Our very educated guess based on that little hint is that Steward Bank is launching a platform that allows you to do all your banking related stuff in one place. The issue though is not what but where.

The flyer Steward Bank has been sending around is this one: 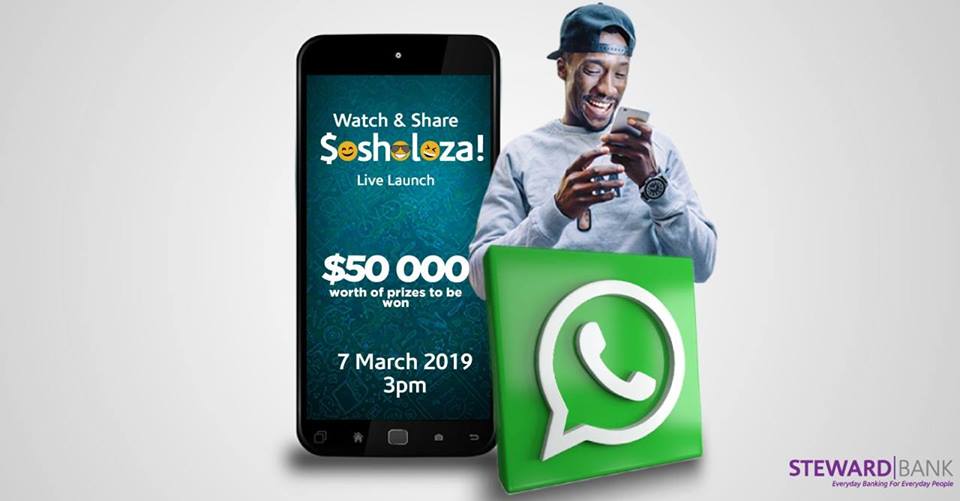 That big WhatsApp logo there is betraying them. Steward Bank is building their next platform on WhatsApp. This may sound like a small thing but it’s a very big deal.

More than 7 million Zimbabweans are on WhatsApp. They know how to use it, they don’t need to be trained on it or to memorize short codes. All they have to do is to save whatever number Steward Bank will be using there. This opens up the bank to a far bigger addressable market.

A number that does everything

Now if by a number that does everything Gonyeti and Maggie meant that Sosholoza is an agnostic platform, then Steward Bank could just have changed the game. Let me explain:

Steward Bank already has a relationship with their fellow Cassava company, EcoCash and they have access to the EcoCash platform. It follows that Steward Bank can then be an agnostic platform that links all the mobile money service providers to one another and to all other banks. How?

OneMoney and Telecash are already on Zipit and Zimswitch. Zimswitch has a publicly available API that allows you to build on it to facilitate transactions amongst all banks on Zimswitch. This is what allows you and I to swipe our debit cards at any POS terminal regardless of which bank issued the card and which bank supplied the merchant with the POS terminal.

Steawrd Bank is on Zimswitch. So theoretically, Steward Bank can build a solution that allows customers to move money from EcoCash to OneMoney via Zimswitch and vice versa. If indeed this is what Gonyeti means by a number that does everything, if that’s what Steward Bank is supposed to have launched at 3pm today then it’s worth the wait!

Essentially Steward Bank becomes the biggest transactions platform in Zimbabwe. A beast born as a cross between EcoCash and Zimswitch. Let’s wait for the launch!

2 thoughts on “What Could Be Steward Bank Launching? From The Hints They’re Dropping It Could Be HUGE”