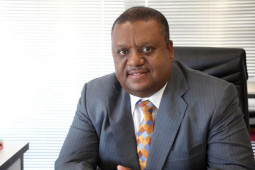 Mr King joined Econet back in 2015 and prior to that worked in a number of different roles at Bharti Airtel International, Celtel Internation and interestingly as CEO of Innscor from 1998 to 2000.

The UN’s statement on the appointment reads:

Mr. King recently served as the Chief Operating Officer at Econet Wireless where he was influential in digitally transforming the Telecommunications Company. He served on the Boards of Liquid Telecom Zimbabwe, Econet Burundi and Econet Lesotho, bringing to the position over 30 years of experience in innovation, business development, organizational & digital transformation.

He previously served as Managing Director at Bharti Airtel International and Celtel International, having worked in Uganda, Nigeria, Malawi, Zambia and Zimbabwe. Mr. King has spearheaded the implementation of several technological innovations, including digital products, and overseen developments aimed at digitizing school education and healthcare. He is a passionate driver of youth development and empowerment.

Mr. King founded various entrepreneurial endeavours, in the field of agriculture and food security, driving efficiencies through technology innovations. He held the role of Chief Executive Officer and Group Marketing Director at Innscor Africa Limited where he pioneered the growth of a range of products and services, from bread and confectionary to video games and entertainment, and expanded the Zimbabwean business ventures in the region.

He earned a Master of Business Administration from the University of Zimbabwe in 1994 and completed several specialized courses at INSEAD, HEC Paris and Harvard Business School.

The resignation of Fayaz King was kept well under wraps as his most recent public appearance at the YouthConnekt Startup Tour Bus yesterday was made as Econet COO:

[Update] Econet also sent out an official communication earlier this morning acknowledging the appointment and the company thanked Mr King for his contribution. He will continue in his role until September:

As Fayaz moves on from the Econet family that he had become such an integral and vital part of, we would like to thank him for his contribution and wish him and his family the best as he takes up this opportunity at the United Nations.

On behalf of the Econet family and on my own behalf, I would to like to congratulate and wish Fayaz well in his new assignment.

We wish Mr King all the best in his new role.