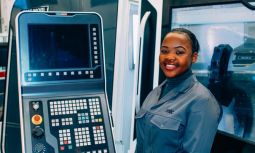 A young Zimbabwean teen, Melissa Chigubu has been named as one of the top 50 engineering students in the UK. Melissa who has has been living in the UK since 2012 is currently doing her apprenticeship at Advanced Manufacturing Training Centre’s(AMTC). Speaking about Melissa’s achievement,AMTC’s managing director, Paul Rowlett said:

Melissa is a talented and dedicated learner who strives to excel, demonstrating exceptional skills for her early career stage.

Our training staff regard her competency portfolio as the best they have ever seen, and this accolade recognises her outstanding performance, professional behaviour and support of other learners.

… She is a strong advocate for women in engineering and in apprenticeships. She has been instrumental in activities that aim to encourage women to follow engineering career paths as well as to increase teacher and parent engagement by breaking down traditional stereotypes.

Her time has been marked by proud achievements such as being named apprentice of the month three times and being the first female to complete the institute’s foundation course. Melissa Chigubu has also worked at prestigious Swedish engineering company GNK Innovation Centre.