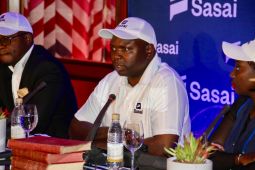 Sasai promises to keep remittances costs low. They have announced their fees to be only 2.5% of the money being sent. Traditional remittance channels have fees that get to as high as 15% of the money sent and sometimes even higher.

As part of their efforts to promote the uptake of the service, Cassava has launched a 30 day promotion whereby folks sending money to Zimbabwe will not be charged any fees. Cassava Smartech Zimbabwe CEO, Eddie Chibi said:

By offering a free promotion, we are trying to create more foreign currency inflows into the country from outside Zimbabwe. We won’t make any money on it for now

When money is sent via Sasai, it will be received into the recipient’s EcoCash FCA wallet. And since EcoCash now has a bureau de change service, recipients will ‘have the option’ of converting funds in their FCA wallet to their regular wallet at EcoCash’s exchange rate.

Of course they won’t explicitly say it, but chances of recipients getting their money as hard currency are slim. However, Zimbabweans will have a difficult time trusting any FCA accounts and what nots because the government has changed stances countless times regarding forex and in the process robbed all of us every one of those times.

Are the low fees sustainable?

It doesn’t matter if the remittance fees announced make sense for a remittance business model.

For the Zimbabwean channel, Cassava will probably keep the fees at the said 2.5% or even keep them at zero indefinitely. The Econet group is hungry for foreign currency right now. If they convince enough people to send and receive money via Sasai on both sides of Zimbabwe’s borderlines and then convince (or force) a good proportion of the recipients to liquidate via the EcoCash Bureau de Change, they will have found a good way to convert their mountains of Zim dollars into foreign currency.

So they will not necessarily make money by facilitating the transfer of money from the diaspora into Zimbabwe but they will have a strategic tool that permits them to legally acquire foregn currency for their operations or to even remit earnings (this is conjecture).

On Facebook, the founder of Cassava, Strive Masiyiwa was blogging using the hashtag: #RemittanceFeesMustFall. Whatever the reason, remittance fees may indeed fall. There are a whole lot of ‘ifs’ in this article though…