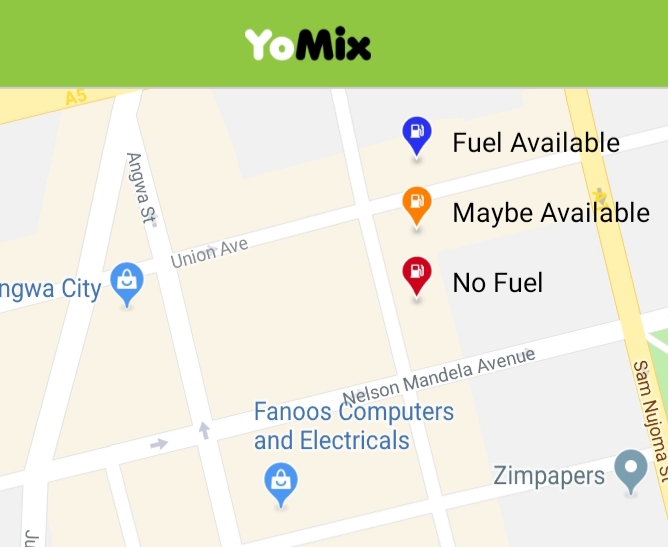 That’s exactly how I feel about YoMix’s new Fuel Finder feature. What the heck is Fuel Finder doing in an app that’s used to buy cheap data, SMS and voice airtime?

It’s doesn’t make any sense- Econet just shoved this feature in YoMix. It’s like WhatsApp adding a feature that allows users to check the cause of their illness. Fuel finder doesn’t even have any relationship to the (previously) existing features which are in YoMix

Instead, I think Fuel Finder is better suited to be in Sasai than in Yomix since Sasai is ‘an app of app’s’ which are diverse in their functionality.

Why not developing an app

Econet could have just developed another app which was based entirely on this feature but it didn’t. Rather it chose to improperly fit it YoMix’s catalogue of features.

Maybe the reason why Econet didn’t develop a standalone app for the Fuel Finder feature is because, the fuel situation is definitely going to improve one day in Zimbabwe and then the app would be rendered useless. In that case, it would have wasted the resources which were dedicated to the standalone app.

But by adding the feature to an existing app(YoMix), it will just remove the feature from the Yomix when fuel situation improves. In that case, Econet would lose way less than in the case of shutting down an app. Do you think that’s the reason? I think not

I think adding Fuel Finder is one way by Econet to try to ship older users on YoMix. Remember that when YoMix was initially introduced, it was only for people between the age of 16 and 34- something that was in line with Econet’s Elevate initiative. However, YoMix was later opened for everybody but by then it’s momentum (which happens at the launch of every product) had subsided such that some older people (older than 34) didn’t bother to join. And since YoMix is used by young people (who spread the word too), older folks are of the opinion that the app is for youths.

Since most of the motorists are older people, Econet thought it wise to add Fuel Finder in Yomix. Let me explain this.

Motorists are now used to hunt for fuel every now and then (almost every month) in Zimbabwe. Accordingly, it is during these times a feature like Fuel Finder will come in handy. Now they will turn to YoMix to find fuel and after they get their fuel there are higher chances that they will take time to discover the cheap data or SMSs they can buy using the app as well. Ultimately, YoMix is used by both youths and older people and that means more users. The fact is Econet needs older and more people on YoMix and the bait that’s fitting to achieve this is the Fuel Finder.

Also read: Hidden Gems: How To Buy (A Couple Of) Cheap Bundles On YoMix