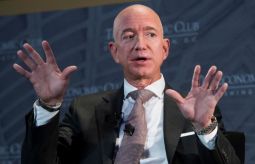 Update: Wikipedia has since corrected the error by replacing the word, “thief” with “charity donor”

It looks like one of the Editors at Wikipedia has made a gross error which tarnishes the image of the world’s richest man, Jeff Bezos. Wikipedia is describing Jeff Bezos as a thief among a number of honourable adjectives. Visit or take a look at the Wikipedia page: