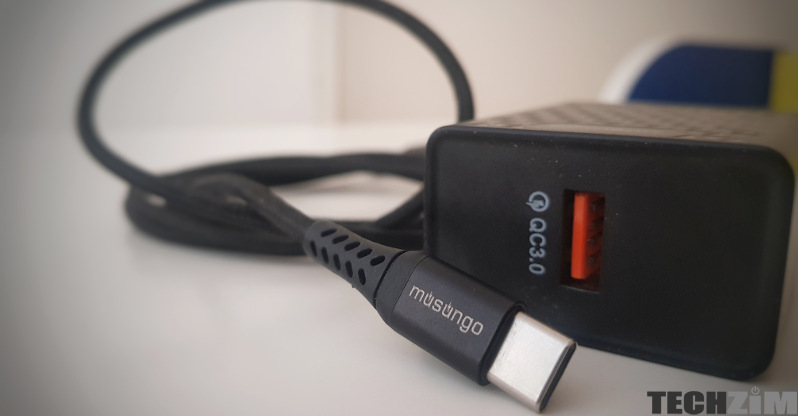 When I got my hands on Musungo’s new cable one of my colleagues raised an interesting point when seeing how excited I was to review the cable. His point was simple but very important: “It’s just a cable”, he said. From the title of this review, his statement clearly stayed with me during my testing phase.

PS: During the first week of the review, I couldn’t get any numbers on how quick the Musungo USB C Cable(ZW$120) actually was because temperatures simply wouldn’t allow fast charging to occur on the phone and at times I would get a notification telling me that the temperatures were too high to charge and I would have to wait for the phone to cool down.

This wasn’t the fault of the cable by the way but just the fact that temperatures were too high and the USB C cable that came with the Galaxy S8 we used for testing had similar issues.

Once temperatures became bearable again, we started comparing the USB C cable that comes with the Galaxy S8 to Musungo’s USB C cable. We tested charging speeds and data transfer speeds to cover every use case you’ll come across if you were to buy the cable yourself.

The need for speed

For the first scenario, we used a fast charging power bank and the results were as follows:

Musungo’s USB C cable had an 18 minute lead on average but both times when we tested the local cable the temperature was 1°c lower and that could’ve had a slight effect.

In the second scenario, we pit the Samsung wall charger + Cable combination against Musungo’s QC3 wall charger (US$6) + Musungo cable and got the following results:

The Samsung cable was 15 minutes faster than Musungo’s cable when paired with the Musungo wall charger but it’s also worth noting that there was 3°C temperature difference which probably played a part in this difference. All things being said the wall charger proved itself capable of charging your device quickly if you’re ever in need of a quick top-up of juice before dashing out.

Who let the data out?

As mentioned before, we tested out the speed of data transfer to see which cable worked best for transferring files to and from the phone and laptop:

The Samsung cable was a second faster than Musungo’s by 1 second both when receiving a 1.14GB file and when sending the same file. It’s a negligible difference and you’ll decide for yourself how valuable that second is for you. What I can definitely say is that when moving music and movies from your phone to your laptop and vice-versa you’ll see no discernible difference in terms of time.

The wall charger is your standard plastic wall charger but it does feel slightly lighter and a bit more flimsy than the Samsung brick.

The cable is a different affair. It’s a braided 1m cable that feels higher quality than the cables that come with most phones. There is one thing to keep in mind. Braided cables look and feel better than the cables that you get out of the box but over time there is a high probability that the cable will fray and that will affect appearance and feel.

If your phone supports fast charging and your cable isn’t cutting it then I suggest that you look at Musungo’s USB-C charger. It comes in two sizes -1 & 2 metres and in 2 different colours – black and red – which means you can add a personal touch. The two colours are also less prone to getting dirty when compared to white cables which is another subtle advantage.

Where I would totally recommend getting the cable is when you’re buying a replacement cable for a cable that you’ve lost or broken. Buying these cables in the street always come with guarantees that they are fast charge compatible even when they are not which makes buying the cables a chore.

With Musungo you have a company that has an identity and reputation to keep so if they sell you a cable that’s defunct or falsely advertised you can always lodge complaints with them and you can also voice your disappointment and people will know which brand to avoid – something you just don’t have when you buy no-name cables from random shops.

What about the wall charger? Well, if you have a phone that’s fast charge compatible but for some reason, the manufacturers decided not to put a fast charger in the box (I’m looking at you Apple) then you should probably get one. The only downside I saw with the wall charger is that it gets crazy hot when you’re using it – but this isn’t uncommon in the land of fast chargers.

random ridiculouness
one year ago

What’s the temperature element you stated in your tests, is it the temperature of the device being charged, the power brick, the cable or the weather? I fail to see the correlation to the said tests. For testing cables, one would normally measure things like voltage, amps, watts and tolerance etc. What’s the power rating on this cable and brick, is the brick smart, does the brick optimize the power output depending on the device it’s charging as this affects battery wear on some devices. A simple benchmarking app would help in getting some of these, but well you’re Techzim…

Also
“…It comes in two sizes -1 & 2 metres and in 2 different colours – black and red – which means you can add a personal touch…”
How is there a personal touch when there are only two colour options to choose from??? On the length of the cables, isn’t it that a thing of one being a Gen 1 (the 2m one) and Gen 2 (for the 1m) which makes them different altogether spec and application wise?

in response to the second half of your comment i.e the “for testing cables” section please advise on which app would do this and

finally overlooked the voltage, amps, watts because I didn’t consider that someone looking to buy a cable would consider all that. Thanks for the heads up

Zibusiso Masuku
one year ago

Fazil
one year ago

The price is just for the cable what about the wall charger?

Ceramic Tiles have been saving my povo-grade rapid charging self when it comes to heat. I just put the phone on a clean spot and it rapid charges uninterrupted until it ramps down after 95%. The full metal body on my phone also helps keep it at or near the golden 25 degrees.
*Useless fact of the day: my phone used to get so hot the glue holding the ‘Nokia’ lettering on the back perished. My phone is now named ‘O’.*
Other stuff can work (as long as it has enough thermal mass to keep sucking up the heat your phone puts out), just don’t use anything significantly below room temp to avoid condensation inside the phone, coz if you do, I will laugh my with my best ‘Thriller’ laugh.