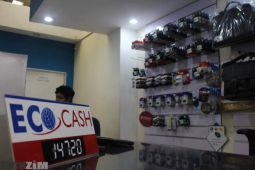 Almost two weeks ago EcoCash warned users that the platform would go offline for 24 hours over the weekend. They said this was to make the system better yada yada yada.

Besides the fact that things did not go too well, EcoCash introduced some new user experience features. In doing this there is one thing that they really botched up (maybe there are other things but this stood out): merchant payments. It’s disappointing because the mobile money company had made the process of paying in a supermarket using mobile money quite smooth.

Initially one had to go through a cumbersome USSD menu to pay for goods at the till. Then USSD long codes came along which allowed you to input all those steps at once and then just enter your PIN. EcoCash innovated further and integrated with merchants particularly big supermarkets.

The integration allowed shoppers to just enter their EcoCash number into a POS machine and the next thing they do is to just confirm the payment they would be making by entering their PIN onto a pop up on their EcoCash phone. It worked, simple!

NetOne’s OneMoney made things even simpler

In selected shops EcoCash rival OneMoney has made it possible for subscribers to pay without needing to whip out their phone from the pocket. They can enter their OneMoney number and PIN directly on the POS. In a supermarket situation, every half second counts! Well done OneMoney.

Now, if you go into a supermarket and you want to pay, the bigger chance is that the integration with EcoCash is not working at all. They have been struggling with this for close to two weeks now.

If the integration is working, you will input your EcoCash number into the POS as usual and of course you will look at your EcoCash phone to confirm by entering your PIN. Now you’ll be greeted with this:

Enter PIN to start? What do you mean start? If you just say “Ah well, let me just enter the PIN, you then get this message:

In the smooth process this information was in just one pop up that said hey you are paying so much to such and such merchant, enter your PIN to confirm. The PIN itself is the authentication. Why on earth is there a second step??

Well if you enter 1 to confirm this is what greets you:

The blared out stuff is just my name and the merchant I was paying. It so happened that the merchant I was paying needed the transaction ID for their record. The ID is not even shown in that summary screen above. It just says “n Next.” I had to wait for the SMS summary to come so I could retrieve the transaction ID. That information used to be in the confirmation under the smooth process.

Long codes were not spared

So, the screen shots I was sharing above are actually on using a pay merchant USSD long code (you know the *151*2*2… type thing). I just used them to explain how the direct merchant integration is working because they are working exactly the same. So you can’t escape this time consuming and ambiguous UX by using long codes, it’s the same medicine boss.

I thought long codes were not working the first time I saw the screenshot below after punching in a long code:

Yesterday, I heard my sister in law telling someone that EcoCash long codes were not working anymore. Why? Every time she punched in one of those she would be told to enter her PIN to start. I am sure there are a number of drops midway through transactions. I sure dropped a few when I thought I couldn’t long code.

Besides the drops, EcoCash is determined to make our supermarket experiences more dreadful than they are already. Perfect timing: holiday season is upon us, the queues will just get longer! If they are not careful, retailers will just put up signs that say “No EcoCash.” The strong network effects that have kept EcoCash ahead will start to unravel at that point and it will be “Hello OneMoney.”

No it’s not about security

I spoke to four EcoCash people about this and they all tried to sell me some line about this being for security. I refused to accept that and all four of them quickly admitted that there was no added security given by the extra steps whatsoever. It’s like waking up one day and banks are now saying you have to swipe your card 3 times before you enter your PIN for extra security. Come on!

Product development must not be led by engineers who have no idea how users use the product. Geeks that shop online should not be ultimately responsible for supermarket experiences. Well, even the online merchant payments are just as terrible now on EcoCash. So maybe it’s not the geeks that did this.

By the way, long codes even for peer to peer sending of money are now working like this. I know a number of people abandoned transactions when they were told to ‘enter PIN to start’ whilst they were mid way through… It’s not working, simple!