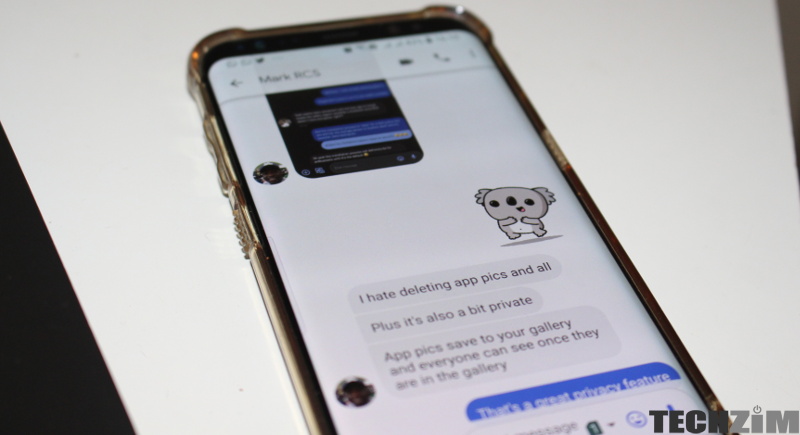 I’ll be the first one to admit it, capturing what RCS messaging does in the title without it getting convoluted is pretty difficult.

Anyway, RCS Messaging improves the texting experience with a whole set of new features that take your phone out of the SMS and MMS era and into the instant messaging era (think WhatsApp & iMessage). Some of the cool features you’ll get once you’ve followed this guide and activated RCS on Android include:

When you get RCS turned on, what’s really happening is your phone gains the ability to tell other phones that it can send and receive RCS messages, and RCS servers help make that work. These RCS servers use modern software instead of the rickety mess of SMS

As soon as you get into the Messages app even with RCS activated the first thing you’ll notice is just how clean it is compared to WhatsApp. For one, there are no WhatsApp statuses fighting for your attention with constant updates every 15 seconds – which is a welcome omission (in my humble opinion).

One important thing to note is that if you send a message after activating RCS messaging to someone who has not done so, it will send an SMS instead and you will be charged 25c locally.

Another advantage found in Google Messages is the availability of a dark mode – a feature that has been in development for WhatsApp for over a year now but somehow refuses to surface. No more burning your eyes if you decide to use RCS messaging late at night.

After testing it out with 2 different contacts I must say my first impressions of the app are mostly positive and I think if Google manages to make this the default messaging application they could be on to something.

Interestingly, the application allows you to set a reminder to reply messages at a later time and date which is something you can’t do on WhatsApp at this point. Why would such a feature be important, I haven’t envisioned a use case for it but I think it can come in handy.

One use case I see RCS being appealing for is work use. It seems WhatsApp is looked down upon by many organisations for work purposes so maybe RCS and the less playful nature of messages will mean it’s taken more seriously and people aren’t mad at you for reaching out to them there. Time will tell

Most of you will have guessed it by now if you’re in Zim, WhatsApp has data bundles and Messages (RCS) doesn’t. This means you’ll have to fork out for a more expensive data bundle if you don’t have access to Wi-Fi which is why iMessage isn’t exactly popular here despite offering similar functionality to Android’s RCS.

Another downside is that the application doesn’t have encryption yet – which probably won’t be a huge deal in Zim (as most times we bring up the aspect of security its brushed aside as a non-issue) but will probably mean the app is considered inferior in more developed countries who consider encryption to be a key feature. Until Google adds encryption it will be competing with apps that are more secure and in many ways more feature-packed which could stifle adoption – which is usually a problem for messaging apps. I don’t want to have to use different messaging apps and it seems that’s the case with most people – ask BBM.

The last annoyance I have with RCS Messaging right now is the fact that users can’t currently make voice and video calls in the app. If you click on the call icon you’ll be taken to the dialler and making that call will result in you paying the $0.93/minute standard tariff on all local networks.

Trying to video call initiates Google Duo – which I genuinely thought was a ghost one of the many communication apps Google has killed over the last few years. That’s not the case and Duo is still actually getting updates

Oh and also the name, Google should’ve come up with something less intimidating but maybe that’s just me.

Google rollout of RCS has to be different

The biggest hurdle for Google when it comes to RCS Messages will be… Google. The company has a way of messing up chat and social applications and the rollout of RCS has already seen some controversy. The app was unveiled a year ago but only started rolling out to Android users in the US in November because the carriers (network providers) there are working on their version of RCS which will be interoperable with the one on Android right now.

The problems extend beyond that because Android manufacturers will also have to support RCS or ship with Google Messages as the default messaging option. Samsung the biggest Android OEM ships with their own Messages apps and has never really been a big fan of Google apps which means they’ll probably continue to do so and it’s not clear what their plans for messaging are.

Also read, How To Activate RCS Messaging on Android