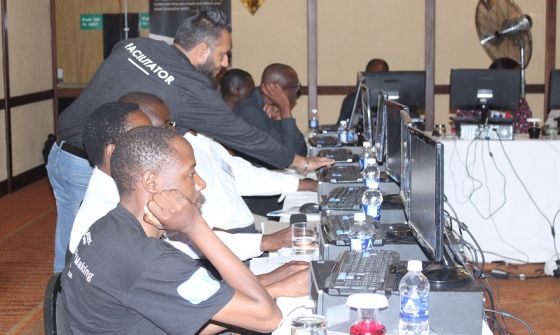 With more and more developing countries seeking strategies to industrialise, learning institutions are increasingly partnering software development companies to get ahead of their competitors.

Call it the race to the internet of things or as Advanced Design Colleges (ADC) (the distributor and trainer of Autodesk software in Zimbabwe) puts it: “the future of making things.”

This movement is sweeping through many countries obsessed with user-friendly production processes and training institutions that are producing talent for the knowledge economy.

Success is a choice

It is either a country joins the bandwagon or remains trapped in archaic educational models that advance the objectives of the colonial enterprise.

David Ngandu the director and founder of ADC says Zimbabwe needs to position itself for this opportunity by investing in design technology:

If things are to be made in 3D technology, we need to start understanding how to prepare for that future now.

The expo, attended by Ministry of Higher and Tertiary Education officials, CAD experts from Zambia and South Africa saw lecturers receive training in industry-specific packages such as AutoCAD Electrical, AutoCAD textile, AutoCAD map 3D, Revit and Inventor among others.

The Expo was also an opportunity to evaluate the implementation of AutoCAD in tertiary institutions. Since the adoption of the education 5.0 philosophy and the time the country introduced STEM, many training institutions have started modifying their curricula.

However, despite the progress, Ngandu says the country still lags in technology uptake so much that the future that Zimbabwe craves is the “present in other countries.”

The undertaking by ADC has drawn the attention of the Ministry of Higher and Tertiary Education which is currently implementing a heritage based education system biased towards innovation and industrialisation.

“As a Ministry, we fully embrace initiatives whose actions impact the quality of life of our citizens,” Professor Fanuel Tagwira told delegates who attended the Expo.

“The workshop is timely as it reinforces government ideals towards modernisation and industrialisation agenda. AutoCAD will stimulate practical product design,” he said.

Zimbabwe has been lagging behind in CAD a situation that calls for urgency in the integration of ICT in educational programmes. Bulawayo Polytechnic Principal, Gilbert Mabasa says a radical stance must be taken to stimulate industrialisation.

Instead of insisting on overhauling the curriculum we need to design a new one. The whole concept of design must change for lecturers, policymakers and students.

Our experts are exportable to any country in the world because our system of education was designed for an external market.

The AutoCAD programme has improved the competitiveness of graduates but more needs to be done.

Kushinga Phikelela Polytechnic Principal, Roy Mavhunga says design technology must be introduced at an early stage. “We need to start at primary level so that pupils are accustomed to using design tools.”

He adds that while much has been accomplished by institutions that have embraced AutoCAD, the point of inception needs to be revisited.
“Many a time we emphasise change at the wrong level,” Dr. Zenda said.

ADC has trained over 400 lecturers in Polytechnics and teachers Colleges since 2017 when it entered into a Memorandum of Agreement with the Ministry of Higher and Tertiary Education.

Under the agreement ADC is responsible for training CAD lecturers, installing the latest AutoCAD software in laboratories as well as personal computers of lecturers and students. Prior to this arrangement, institutions used pirated and old versions of the software.

ADC has been pushing for AutoCAD programme to be part of the Higher Examinations Council (HEXCO) curricula. In 2018, it facilitated for 17 tertiary education officials to attend Autodesk University training Expo in Cape Town to get an understanding of how AutoCAD is impacting industry and training.

But despite all that not all institutions have embraced the software and programmes are not examinable by HEXCO making participation by students voluntary.

Unathi Ntwana, a Civil Engineering lecturer at Walter Sisulu University in South Africa, who was one of the facilitators at the Expo says more needs to be done to expose “academics and policymakers to the advantages of AutoCAD so that they incorporate it into the curricula. Africa cannot continue to do things the way it has been doing.”

Ms. Poniso Watema, the chairperson of the Zimbabwe CAD programme concurred adding” “institutions must take an aggressive approach to the implementation of AutoCAD and the programme must examinable.”

The design revolution is setting the pace for economic growth in Sub-Saharan Africa and countries are waking up to the opportunities that it brings along.

The heritage-based philosophy adopted by the Zimbabwe Ministry of Higher and Tertiary Education seeks to harness technology, localise it and use natural endowments to spur economic growth.

Imraan Lambat, a facilitator from South Africa and the only Autodesk simulation expert in Africa applauds the initiative. He says “Africans should determine their destiny through design technology.”

For some time, Autodesk University has been flying in applications engineers from Europe to come and train Africans but this changed in the year 2000 when it took a deliberate policy to train local engineers thus putting them at the forefront of the change.

In Zambia, however, Zama Sinkala an Autodesk consultant says despite commendable progress the government lacks “political will” to promote AutoCAD.

He adds: “All the major projects are being done by the Chinese. There is a need for a deliberate policy to ensure local engineers are at the forefront of inventions.”

As countries brace for the 4th industrial revolution which is predicted to cause seismic changes to the world of production, Sub-Saharan countries need to tackle red tape, partner industry and commit to investing in technologies that will define future production processes.

Admire Masuku is a journalist based in Harare and a Journalism lecturer at Harare Polytechnic School of Journalism and Media Studies.

Tech Bandits
one year ago

Autodesk products are great. The problem is their very high subscription fees. Even Americans and Europeans, with their much bigger economies, complain about them.