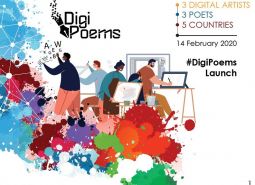 Comexposed is partnering with the British Council along with Page Poetry Alive to coordinate the production of an interesting set of digital poems at the launch of DigiPoems.

The cross-cultural initiative allows poets, animators and visual artists from different countries to showcase their unique piece of art in some kind of disciplinary collaborations.

At the launch on Friday, 3 digital artists will make animations based on poems shared by 3 poets – each digital artist working with the poet to produce visuals based on a poem. The digital artists and poets working together have never met so this will be their first collaborative effort together.

The following lineup of artists will be part of the artists coming together for the launch event:

The animators will be interpreting the spoken word pieces which will add an element of mystery to whatever will be produced as the final visuals. The event will take place at the British Council in Harare (16 Cork) from 530 PM. Entry will be free to those who RSVP for the event on the following numbers; 0773723755 or 0774852422

These are the poems that were presented at the launch: