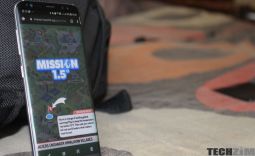 United Nation’s new mobile game Mission 1.5 is an interesting approach to the global issue of climate action. Without a proper way for decision-makers to get input from the public regarding climate change, the UN decided to build a web-based game to bridge that gap.

People around the world are calling for climate action. Unfortunately, they don’t often have an easy way to get their messages to decision makers.

At the same time, world leaders are faced with the challenge of making urgent and bold decisions that will keep global temperature rise below a safe 1.5°C.

Mission 1.5 aims to bridge that gap.

Using mobile gaming technology, Mission 1.5 educates people about climate solutions and asks them to vote on the actions that they want to see happen.

What will we do with the results?

Your vote, and those from your country, will be compiled and presented to your government to encourage bolder climate action. Votes will also be counted in a global tally. So stay tuned for the results!

The game is more of a questionnaire/survey in reality but it’s an interesting way to do such a thing. You answer questions regarding global warming with a view to keep global warming under 1.5 degrees Celcius. If you get most of the questions wrong the temperature rises and you’ve failed to prevent global warming.

You also get to vote in-between the surveys – which allows you to suggest what you think your government should do to battle climate change – which will be passed on to your government.

The fact that neither Econet or the UN needed to make an actual app instead, sticking to a web-app representing an opportunity for people looking to deliver great experiences to users without being bound to Android/iPhone and the merits or limits of each platform.

Finally, if you’re climate change is one of those things that concern you (even if it isn’t), play UNs Mission 1.5 web-based game here