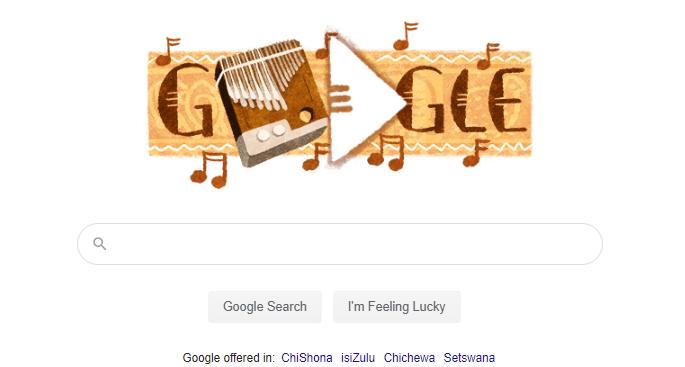 It’s a well-established fact (yes fact, not opinion) that Google Doodles are pretty cool. Today’s Doodle is extra cool with the search engine sharing a 4 part-story of the Mbira.

The mbira is a Zimbabwean musical instrument consisting of a wooden board with attached staggered metal tines. The wooden soundboard (gwariva) is affixed with a series of thin metal keys, which are plucked by the thumbs and forefinger. A large hollow gourd (deze) provides amplification, and materials such as bottle caps or beads can be affixed to the soundboard to create the instrument’s signature buzzing sound.

The instrument features prominently in a variety of Shona ceremonies, and it remains a vital link to the past through songs that have been passed down over hundreds of years. While the mbira was traditionally played by men, Zimbabwean women have increasingly taken up the instrument in recent years and continue to push its timeless sound in new and contemporary directions.

Clicking on Google’s Mbira Doodle takes users to an interactive page playing Nhemamusasa. There’s a short animation of a girl accompanied by her mother who happens to hear a random man playing the Mbira in the distance. The girl approaches the man who decided to teach her to play the instrument.

At the end of this animation, you can then learn to play the Mbira having to match the Nhemamusasa tune. Pretty brilliant stuff if you ask me!

The animation is well thought out and actually has 4 chapters. I won’t spoil the rest of them. Go experience them instead!

PS: The experience is 10 times better on mobile as the game at the end is suited for mobile and much harder on PC.

One thought on “Google Celebrates Zim Culture With Mbira Doodle”