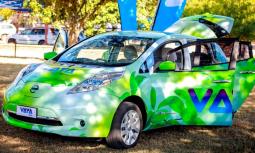 Back in November, Vaya announced the launch of their electric car ride-hailing network with their first fleet of electric Nissan EVs. At the time the company shared that their target was to have 100 vehicles on the road at some point.

It seems more of those electric-vehicles have finally arrived, with Vaya press material announcing the launch of electric vehicles as part of their ride-hailing fleet… again (we’ll talk about that in a moment).

Given that such announcements were made before, the important question is what has changed?

Well, the electric-vehicle fleet is supposedly going into operation this week and playing around with the Vaya application suggests this might be the case as the Vaya Electric option popped up briefly in-app. It later disappeared so it might be hidden in code right now or that was just an error.

The electric cars will be charged via charging stations deployed by Ugesi Energy – another subsidiary of Econet. I expected that details regarding how many of these stations have now been deployed along with the number of electric vehicles deployed but unfortunately none of that information is being shared publicly for some reason.

Initially the EVs will be available in Harare but Vaya plans to roll them out to the rest of the major cities and after that even the rest of Africa. Lofty goals.

The confusion surrounding Vaya and their electric car network

Some of the frustration we’ve had regarding the launch of the electric vehicle network is just how confusing all this has been.

In May of 2019, Masiyiwa announced that Vaya would add electric-vehicles in their fleet. In that announcement, he spoke of a hopper – a 3 wheeled vehicle that would only be available in Harare’s CBD.

Months later what materialised wasn’t the Hopper but the Nissan Leaf. Whilst that’s a good thing and the Leaf is more versatile than the Hopper, that too raised some concerns – i.e where will these vehicles be charged and how many of these vehicles are actually available to ride in.

More pertinent is what became of the Hopper which Mr Masiyiwa himself said the company was waiting for the first 100 vehicles they had purchased to be delivered?

Regarding where the current electric vehicles will be charged Vaya Mobility CEO Dorothy Zimuto said the following;

Nationwide, every 100KMs from the main centres there will be a charging station

It’s not clear where these main centres are or how many of them we will see in future.

Vaya also hasn’t said anything about ownership of the vehicles. The model we know to be in place is that drivers register their own vehicles and earn a percentage of the trip’s fare. With the decision to purchase EVs, Vaya will now own the fleet and it seems they will be hiring drivers which means their costs are going to grow exponentially

Vaya’s intentions with the launch of electric vehicles might be good but the communication has left so many holes, it’s hard to have confidence in whether or not this will be a successful project or if it will simply become turn into another Kwese.

Lastly, when you consider that Vaya is the subsidiary of a publicly listed company you would expect that Cassava Smartech (and by extension Vaya) would be talking about these projects more openly in order to attract investment and to keep existing shareholders in the loop but that doesn’t seem to be the focus currently.

This shouldn’t be information that journalists seek behind the scenes as if one is trying to sign up for the Illuminati and Cassava, and its subsidiaries would be better served if they were more open.

One thought on “Vaya Announces Addition Of Electric Cars To Ride-Hailing Fleet, Again…”