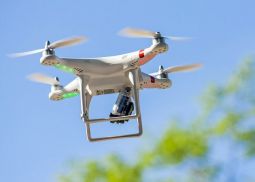 Our loyal readers would have come across the name Tawanda Chihambakwe by now. The drone professional absolutely loves drones and has been behind a number of cool initiatives locally including a drone racing community a few years ago.

Right now we talk about how, Chihambakwe won a US$15 000 grant earlier this year in We Robotic’s Unusual Solutions competition. The challenge he participated in was to figure out how drones and data can be used ethically to solve local problems.

Tawanda set out to build a “Drones for Good Network”. This would enable drone pilots, technicians, and data scientists to connect, collaborate, learn and grow the use of drones through ethical approaches to gathering, storing, and sharing data.

The Drones for Good Network was also intended to “connect and empower local drone stakeholders and create a space where they benefit from each other’s insights and experience across communities and regions.”

Drones for Good and Tawanda were identified amongst 8 other finalists who then went on to compete for a grand prize of US$100 000. Unfortunately, Tawanda didn’t win the grand prize but his has always been a story about being passionate about drones and the fact that he has come this far cannot be understated.

You can watch Unusual Solutions Final Pitch Event video below where Tawanda explained briefly what Drones for Good is;

Tawanda also explained what the competition meant to him;

Chihambakwe explained that the funding he won would be used to set up the Drones for Good platform which will included research articles, courses along with acquiring office equipment. He also mentioned that part of the funding will be used for at least one social impact project.