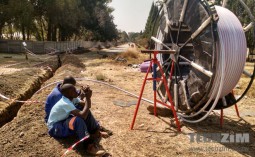 Over the past few years, TelOne has complained at length about the vandalism that has affected their network delivery from time to time. In 2018 there were 393 such cases, which reduced to 303 cases last year.

This year they’ve already been 139 incidents of vandalism and the most recent resulted in an internet blackout that not only affected TelOne but also affected other mobile networks.

In a recent interview, Chipo Mtasa the Managing Director at TelOne shared that they are still battling to address the problem and in the long-term TelOne will replace the copper infrastructure with fibre which is less prone to vandalism:

While efforts are being made to improve our client experience, the business continues to suffer setbacks, resulting from network vandalism. In the short term, we have alarmed our network and increased manning levels by physical security guards.

While this brings some relief, on the whole the network thieves continue to advance their own tactics hence our strategic focus in the medium to long-term is to gradually replace copper with fibre which is less prone to vandalism

Fibre optic cable is less prone to vandalism since it’s harder to get to and less valuable to common thieves – although in South Africa there have been incidents where fibre optic cables are vandalised by thieves looking to get the Kevlar from those cables as well.

2 thoughts on “Vandalism Still A Huge Drawback For TelOne”