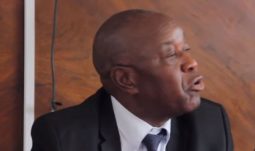 Yesterday we broke down some of the information that Econet presented before the High Court as part of its urgent chamber application to temporarily suspend the Magistrate’s decision to grant a Search and Seizure Warrant to ZRP.

Douglas Mboweni’s statement in that application was a scathing criticism of CIDs Head of Asset Forfeiture Unit Mkhululi Nyoni and Magistrate Richard Maboa, with multiple calls for both individuals to “apply their mind” before seeking and authorising the search warrant.

Another section of Mboweni’s statement addresses an even more controversial point regarding what the executive feels is targeting of their company. Mboweni says the following;

This loss of value of the ZW$ has been blamed on Econet and Old Mutual as it fully appears on the press statements mentioned above. Chris Mutsvangwa was on television blaming Econet and threatening them with action similar to the coup that happened in 2017. The reference to coup betrays an agenda to destroy Econet and remove it from its market leadership position and to the benefit of another operator. Therefore these warrants are calculated to enrage Econet subscribers and drive them to other mobile operators.

Beyond this, Mboweni doubles down on Chris Mutsvangwa’s influence suggesting that Mutsvangwa’s motivation is driven by jealousy stemming from the fact that Supanet which he was a principal in was not awarded a telecoms licence

It is also important to mention that Chris Mutsvangwa is married to the current Minister of Information, Publicity and Broadcasting Services and that he has an interest in the telecommunications industry. At the time Applicant [Econet] applied for its initial licence in 1997, Chris Mustvangwa was a principal in a consortium that applied for a telecommunications licence but was unsuccessful. As a result, the threats against the Applicant must be taken in that context.