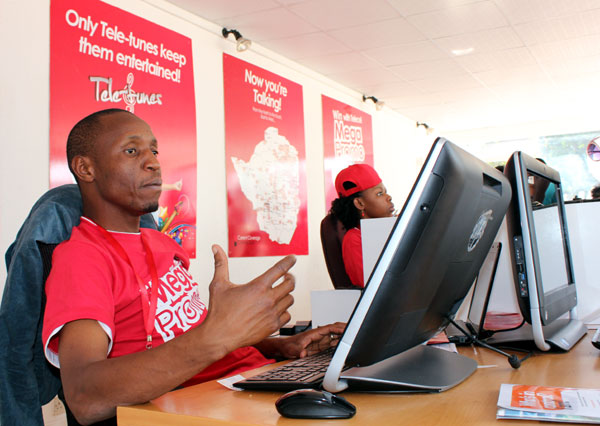 Telecel employees informed NewsDay that they had demanded a salary increment from the meager ZW$1200 they are currently getting to a more respectable but not outrageous ZW$10 000. A 733% increment that will be hard for Telecel to meet considering their financial standing.

It’s reported the Telecel workforce met with CEO Angeline Vere after the company failed to meet their promise to raise employee salaries by 30% – a promise made in February. On the same day, Telecel workers staged a sit-in protest.

We are meeting the management on Monday (today) to discuss a meaningful salary increment. Right now workers are getting as little as $1 200. The 30% increment agreed upon in February has not yet been implemented without an explanation.

We are expecting a minimum salary of $10 000 and our message is that if nothing concrete comes up on Monday all Telecel workers around Zimbabwe will withdraw labour. I will provide finer details about our position once we conduct the meeting.

We have presented our part of the bargain through the National Employment Council.

Monday came and went and it’s not clear if the increment has been granted. If Telecel’s workforce does down tools as threatened, the impact will be disastrous. Telecel and Telecash subscribers won’t be able to get customer support which will probably lead to an exodus of subscribers.

Telecel already lost 100k subscribers in the 1st quarter of the year. The company is in no position to keep losing subscribers and that seems like what’s about to happen.

Can Telecel give the workers an increment?

First of all, without knowing how many employees are presently employed at the company it’s hard to answer the question. From the fact that Telecel only made ZW$33.2 million in the Q1 of 2020 – it’s fair to assume that the reason the company is failing to increment the raise is because it would burden the company financially.

Another problem, is the salaries of senior management are shrouded in secrecy which will further disenchant other workers;

A senior engineer is taking home $6 000. Their salaries are shrouded in secrecy and their lackadaisical approach to our concerns suggests that they are earning a lot.

The mismanagement of Telecel over the last decade is now coming to a head. Despite repeated claims that there is a “turnaround strategy in place”, Telecel’s administration hasn’t shared the plan publicly which suggests they have no confidence in the plan or worse it doesn’t exist…