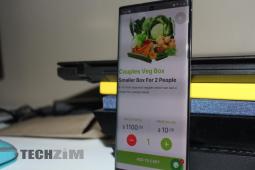 One of the most recognisable local eCommerce brands, Fresh in a Box now has a mobile application. Interestingly, the Founder of Fresh in a Box Kuda Musasiwa has always been vocal about not having an app so I was pleasantly surprised when I heard the startup now had an app.

I reached out to Kuda to understand what had changed, and he basically explained that their user base had been demanding the application and so they had to give the people what they want.

Going through the application, you can see that it’s not that different from Fresh in a Box’s existing web application which means customers won’t have to start relearning the store again. Musasiwa described the app as a “hybrid between the web app and native” and using it felt like that. The hybrid approach was adopted since it then

It’s actually hard to say anything new about the application but that’s not necessarily a bad thing since it works well;

Beyond Fresh in a Box, Musasiwa confirmed that Bottle Store – their eCommerce property for alcohol- and Joey’s Pizza would be getting their own versions of apps in the near future

One thought on “Fresh in a Box caves into customers demand. Finally releases app”