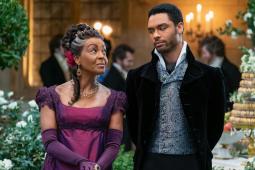 That title is a mouthful I know but it captures every aspect of Netflix’s latest in vogue show. Bridgerton is Shonda Rhime’s first show after she broke ABC’s heart and ran away with Netflix. The plot, while entertaining to some, is as preposterous as they come but the series does have a Zimbabwean as part of its main cast.

“Inspired by the bestselling novels, this series follows the eight close-knit siblings of the powerful Bridgerton family as they attempt to find love.”

If you read Pride and Prejudice (or any Jane Austen novel) you will have no problem understating the setting and plot of this story. It takes place in Regency England during the times of stilted manners and convoluted courtship rules. Brothers and fathers would literary pimp out their sisters and daughters without anyone cringing. In this shamelessly patriarchal world, young girls had revolting coming-out parties in the midst of puberty and were married off to potential suitors “in order to guarantee their future.”

Like Jane Austen, Shona Rhimes tries to paint a positive picture of that period that appeals to our modern refined mental palates. The irky bits are painted over with glamour or presented in such overtly disapproving ways that draw ridicule and revulsion. For example, the main female protagonist in the story is allowed to chose her own suitor and her brother who attempts to steer her towards his own choice is easily made the villain of the story.

Again the more you watch (I was forced to watch), the more you are compelled to make comparisons between what’s in this show and Jane Austen’s Pride and Prejudice. Apart from the specifics of the story, it’s hard not to come to the conclusion that someone read Pride and Prejudice in school and decided to make their own politically correct version of it and air-brushed it with glitz to make it more appealing.

As a tiny land-locked Southern African nation that is mostly famous for the wrong reasons, we are always happy to see our fellow Zimbos make it on the global stage. People ululated when The Cook-off was added to Netflix underwhelming as it was. It having a Zimbabwean is one of the few reasons to tolerate Bridgerton if you are a seasoned small-screen connoisseur like myself.

One of the lead actors is Zimbabwean, but if you opened this you were already probably aware.

Regé-Jean Page is a Zimbabwean actor who was born in London in 1990 but spent a good part of his childhood here, in Harare. His mother was a Zimbabwean nurse. I have always wondered how this guy’s name is spelt on this birth certificate though. We don’t use accent marks so how did they do it?

Anyway, Page plays a handsome duke in Regency England which would be fine I guess exceptthat he is of mixed race. There were about 30 000 “black” (sic) people in the entire United Kingdom during that time according to Wikipedia (happy 20 years to Wikipedia by the way). There were only about 28 dukes back then. It’s inconceivable that any one of them would have been of mixed race.

Remember we talked about the rigid marriage rules. There were plenty of other rules as well including inheritance laws. The courting rules would have all but precluded blacks marrying whites with the former being always treated as sub-humans. Children born out of wedlock were considered illegitimate and could not partake in the will and therefore couldn’t inherit titles unless they received special dispensation. Granting such would have been scandalous and so no person of mixed race ever became a duke or even close.

And Page is handsome, dukes were fat and old white men as opposed to the lean fit dudes and gals we see in here. The gowns and robes worn by the people in the show are too fine for this era. These people wore garbs compared to costumes in this show. Despite all this Page gives it his best crack and he does shine in an otherwise dull cliche.

The casting choice is so bizarre one has to ask what the casting director was thinking. Never mind this being historically inaccurate it’s kind of insensitive to have a non-white Zimbabwean play a nobility role in a story set in our erstwhile colonial masters’ domain. Or maybe I am ‘just catching feelings.’

In attempting to rewrite history Shonda Rhimes might just be showing her American ignorance here. We as Africans have our own stories to tell that would be more historically accurate even though they would be less glamorous. Stories that would resonate more with Page’s last role in the remake of Roots for example. They are not fun and light but they are pedagogical.

We cannot just watch something because it has a Zimbabwean in it. If it wants to be truly diverse, Netflix has to dig deep and tell genuinely African stories when casting Africans. Stories like those of Lumumba and Mandela as opposed to thinly veiled Western drivel like Queen Sono. Stories about Mzilikazi, Great Zimbabwe, Rozvi, Mutapa etc made in the Vikings mould would appeal to a global audience no doubt.

Am I asking for too much?

Not at all… Netflix has been trying to crack the African market for the longest time. One way they could do this is putting their vast resources to giving Africa a proper period piece.

If the people of the continent saw any one of the above-mentioned stories being given the Netflix treatment, they would have a reason to endear themselves to the streaming service.

I have always been old at heart and enjoyed dark shows like The Wire and could not stand Pretty Little liars. If you enjoy The CW shows like Supergirl, Vampire Diaries and Reign you will love this. If you are a sucker for Hallmark productions this is also your thing. Dig in and support a fellow Zimbo.

As for me, I am currently cleansing my polluted palate by binge-watching HBO’s Your Honour. In my learned opinion, Bridgerton is just as bad as the last few seasons of Shonda Rhime’s Scandal. It’s too unhinged for my grounded self.