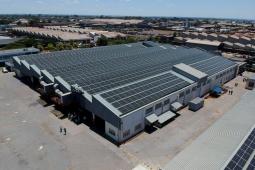 Solar energy has really taken off in Zimbabwe. This is mostly due, in large part, to the national power supplier ZESA failing to either meet demand or struggling under the weight of refurbishing and maintaining dilapidated infrastructure. This has forced many to adopt solar power be it large installations or just enough to keep things charged.

Solar’s uptick in Zimbabwe has been recognised by the Africa Solar Industry Association (AFSIA) in its Africa Solar Outlook 2021 report.

“But what is maybe even more interesting is to see the ambitions and actions of countries that might not necessarily be the first in mind as “solar champions”. These countries include Zimbabwe, Zambia, DRC,
Angola, Namibia, Ethiopia and Botswana.”

The “solar champions” phrase was however followed by an acknowledgement of solar in Zimbabwe being driven mainly by the private sector. The report also showed Zimbabwe’s ambitions for renewable energy.

The current state of things look like this according to the AFISA report:

Will Zimbabwe be a 1 Gigawatt solar producer by 2030

Well… the numbers aren’t impressive and with 2030 only 9 years away it looks like we might not reach that target. However, there have been some very interesting developments that have come to light in recent months.

The first and most important is that the government is willing to play ball. In the podcast we had with Distributed Power Africa CEO Norman Moyo, we were told that the government has been very accommodating. Independent Power Producers aren’t facing the traditional hurdles that I thought were quintessential when dealing with the Zimbabwean government.

This was highlighted by the announcement in December that ZESA was now allowing those with grid-tied solar installation to feed excess power onto the national grid. Net-metering is a great leap forward for the adoption of solar in Zimbabwe.

If you have a grid-tied system you can now earn credits from ZESA making your electricity bill much cheaper. This not only incentivises individuals to take up solar but also large corporations.

Big businesses in Zim warming up to solar

Large corporations in the country have a lot of real-estate both in land and disused rooftops. This was something that was highlighted by Norman Moyo, and he said that corporations need to look at rooftops, for example, as an asset that should be fully utilised.

It has been challenging for Independent Power Producers (IPPs) to convince businesses to adopt solar in this way but the tide is turning according to Norman Moyo. One indication of this is ZUVA Petroleum looking to put solar installations on 180 service stations by the end of the year.

The next aspect of reaching the gigawatt club are EVs. Earlier this year Distributed Power Africa announced that it had installed charging stations in Msasa and was going to install more across Zimbabwe.

This was an important step because EV adoption is key for increasing power demand which will in turn force the govt to push current IPPs through issuing grants, for example. As well as expediting the registration process for prospective IPPs.

The government could also take the initiative and start replacing its enormous fleet of vehicles with EVs. This is mostly for those run around town cars for parastatals like ZESA, TelOne, Zimpost and the ZRP. We have seen some steps towards this, last year ZERA took on an electric vehicle in what seemed like a test for the platform.

One vehicle is not enough, unfortunately. The government needs to speed up the process because if it takes on EVs, the corporations will follow and that will make it infinitely easier for you and me to acquire one. Another by-product of the aforementioned chain of events is that other IPPs will add charging stations to their product catalogue.

Sun Exchange is a peer-to-peer solar startup that allows anyone to buy a portion of a planned installation. This allows you to earn money from that solar plant when it is completed.

The way that Sun Exchange does things is really interesting because you and I can be apart of a number of solar projects. It’s business model is something that Zimbabwean IPPs could learn from or adopt to accelerate solar’s expansion in the country.

Crowdsourcing solar could be a really good way to aid rural mini-grid expansion. The market for this would be the millions of Zimbabweans in the diaspora. It’s not a far stretch either, remittances last year grew by 42% to record over US$1 billion. If even a fraction of that was dedicated to crowdsourcing electricity for rural areas there would be real progress.

If the rural eletrification crowdsourcing model follows what Sun Exchange is doing then its an investment more than charity. Zimbabweans in the diapsora will be directly impacting the lives of rural communities as well as making money.

The factors above don’t come close to covering all the ways that Zimbabwe could become part of the Gigawatt Solar Club by 2030. But are some of the key drivers if Zimbabwe is to reach the goal.

In saying that all those factors and more will have to align if the target is to be met. It seems improbable at the moment, however, there have been developments that a decade ago would have been termed “fanciful” but are now a reality. For example, the uptake of e-commerce, opening bank accounts via USSD and more.

It’s quite possible that Zimbabwe could reach the goal. A lot can change and happen in 9 years. Till then, there is a lot to be work to be done.